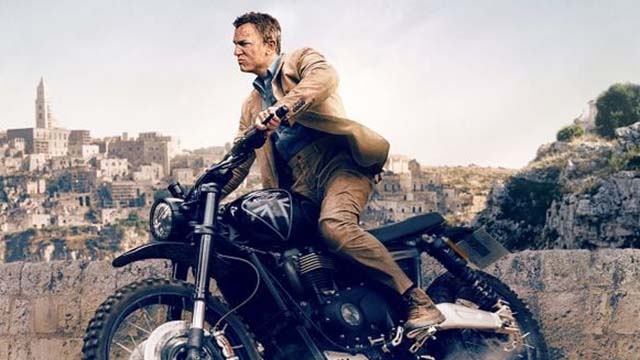 No Time to Die

James Bond is back in No Time to Die, Daniel Craig's final appearance in the nearly 60-year-old franchise. Writer/Director Cary Joji Fukunaga (It) joins veteran 007 screenwriters Neal Purvis and Robert Wade to create a spectacular film that is a fitting end to Craig's memorable portrayal.

James Bond (Daniel Craig) has left the agency, retiring to a quiet life in Jamaica. But that changes when his friend Felix Leiter (Jeffrey Wright) asks him to help track down biochemist Valdo Obruchev (David Dencik). Felix informs him that Obruchev has developed a bioweapon that can target an entire race or even a specific person's genetic code. Bond initially refuses, but he changes his mind when he encounters his successor to the 007 moniker. The trail leads him back to his old nemesis, Ernst Stavro Blofeld (Christoph Waltz) and his prior love Madeleine Swann (Léa Seydoux). Working together with Swann and with the help of his former MI6 colleagues, Bond identifies and must track down the dangerous villain Lyutsifer Safin (Rami Malek). Safin's far-reaching plan to avenge his family using Obruchev's nanotechnology-based agent will succeed if they do not stop him.

The plot of this film is convoluted and far-reaching. Less skilled writers might have lost themselves and left loose ends and unresolved tidbits. Fortunately, the skill of the three writers involved is up to the task. The result is a tight screenplay that never loses the audience or leads them down dead-end rabbit holes. Bond is very much himself but shows a deeper and more personal side than audiences have ever seen. Clearly, they wanted to part with Craig's version of the character with dignity and respect, and they succeeded. Fukunaga's direction shows just as much care, making sure each player fills their role – whatever that might be - with respect. Billy Magnussen's CIA Agent Logan Ash is a bit over the top, but it works perfectly. Malek channels a complex and genius madness into Safin, though the villain isn't quite as captivating as the many incarnations of Blofeld.

As with all Bond films, there are many stunning locations and almost as many car chases and intricately choreographed fight scenes. Technological advances in cinematography in the half-century plus since the character premiered make following the action much better, and No Time to Die might be the best of them all in these departments. Billie Eilish's title song is perfect, and the soundtrack keeps the film on pace with just enough presence to add to the ambiance.

No Time to Die may or may not become a favorite amongst viewers, although fans of Craig specifically should have no complaints. But it will likely be viewed as the best final film for any of the actors who have portrayed the character multiple times. This is a fitting passing for an era that has been the salvation of the franchise. Due to the work of Craig, Purvis, Wade, and now Fukunaga, the legacy is likely to continue for years to come.