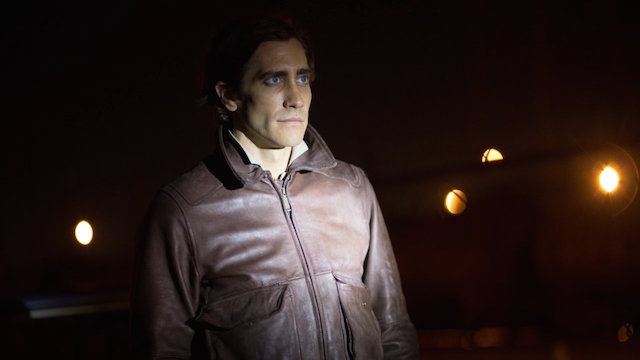 Imagine Travis Bickle transplanted into the world of Paddy Chayefsky’s Network, and you’ll start to get a feel for the creepy, deeply cynical tone screenwriter Dan Gilroy establishes in his feature directorial debut Nightcrawler, a scathing condemnation of contemporary broadcast journalism starring Jake Gyllenhaal as a parasitic freelance news videographer whose chilling lack of ethics gives him a distinct upper hand over the competition.

Lou Bloom (Gyllenhaal) is a petty thief in search of a payday when he stumbles onto the scene of a grisly car accident, where he witnesses seasoned "nightcrawler" Joe Loder (Bill Paxton) gathering video footage for a local news broadcast. Convinced that this is a career he could excel at, Lou promptly purchases a police scanner and a cheap video camera and hits the streets. In short order, he hires an assistant (Riz Ahmed) to help him navigate the city and starts selling footage to TV producer Nina (Rene Russo), one of Joe's regular buyers. As a fast learner with an eye for detail, Lou isn't above manipulating a crime scene in order to get a picture that tells a story. When he beats the police to the scene of a fatal home invasion in an affluent neighborhood, however, his shocking footage catches the attention of two homicide detectives who suspect he's hiding evidence that could be crucial to their investigation. But that footage might be just what Lou needs to enter the big time.

In the world of the 24-hour news cycle, the fight to maintain viewership is fierce. Every day, reporters and news directors walk a precarious tightrope between reporting and exploitation. But when do they cross an ethical line, and what are the dangers if they do? These are just a few of the questions Gilroy flirts with in his caustic, blackly comic script for Nightcrawler. Immediately establishing Bloom as a cunning sociopath in the menacing, nocturnal opening scene, Gilroy then methodically draws us into the character’s unscrupulous headspace by revealing him to be a man completely devoid of any and all moral boundaries: His singular ambition leaves no room for empathy, sympathy, or remorse. In Gyllenhaal, Gilroy finds an actor whose talent for displaying the full spectrum of the character’s misanthropy borders on cinematic alchemy.

It isn’t easy to make an audience want to spend time with a person as detestable as Bloom, and in keeping with the film’s subject matter, Gyllenhaal makes the character so unrepentantly audacious that the viewer effectively becomes the same kind of rubbernecker whom Nina counts on for her ratings. It’s a precarious balance to strike for a film that seemingly exists to highlight how easily the news—and in turn, the viewer—can be manipulated, but Gyllenhaal commands our attention with his strikingly gaunt appearance and too-quick smile, making us wonder just how far his character will go to find success. Of course, it doesn’t take long to get an answer to that question, and even as Gilroy’s screenplay begins to settle into the motions of a more traditional thriller, supporting players Russo, Ahmed, and Paxton are effective in their roles as the unwitting pawns in Bloom’s nefarious game. Having returned to the screen in 2011’s Thor following a brief hiatus, Russo is compelling in her role as an aging TV news producer who’s acutely aware she’s on the lowest rung of the ladder. Try as Nina might to maintain a steely exterior while dealing with the calculating Bloom, Russo brings the icy character’s vulnerability to the surface in ways that highlight her young counterpart’s complete detachment from humanity. Paxton is at his cocky best as the nightcrawler Bloom models himself after, and as Bloom’s harried assistant, Ahmed represents the closest thing this movie has to a moral compass and a sympathetic character.

Yes, once Bloom captures the chilling aftermath of a violent home invasion, Nightcrawler loses some of its edge by morphing into a more conventional thriller. But it’s a testament to Gilroy’s firm grasp of his themes regarding the media and society that he ultimately brings them full circle for the film’s uncompromisingly bleak denouement—one that drives home the fact that we should always be conscious of the media we consume and where it comes from. It may not be a pleasant message to hear, but thanks to Gilroy’s skillful writing and Gyllenhaal’s fearless performance, it’s as difficult to look away from as the nightly news.