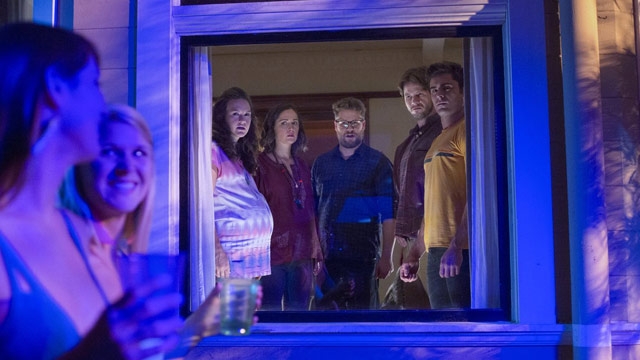 Although it’s obviously a sequel, Neighbors 2: Sorority Rising manages to break new ground by focusing on a group of female college students who party on their own terms, a switch-up that allows the film to combine meaningful commentary on gender roles with goofy, ribald high jinks. Picking up where the original Neighbors left off, protagonists Mac and Kelly Radner (Seth Rogen and Rose Byrne) are living with their young daughter (Elise Vargas). After Kelly becomes pregnant with the couple’s second child, the pair put their current home on the market and quickly find a buyer. However, while their house is still in escrow, a new sorority moves in next door. Led by the wily, strong-willed Shelby (Chloë Grace Moretz), Kappa Nu is to meant to be a carefree, weed-filled utopia for female students, an alternative to the sort of misogynistic and testosterone-filled environment found at frat houses. The ladies are aided in their efforts to get the sorority up and running by Teddy (Zac Efron), who has been thrown out of his own post-collegiate home. Since the new buyers can back out if they don’t want to live next to a rowdy, all-night party haven, Mac and Kelly beg Shelby and her crew of misfits to hold off on their hedonism for 30 days; unfortunately, the gals need to hold rush parties immediately to make enough money to pay for the house. Much like the first movie, disagreements between the two sets of neighbors eventually devolve into all-out comedic warfare.

Rogen is predictably hilarious as a man-child who finds himself in over his head, and he’s bolstered by another strong performance from the versatile Byrne. Kiersey Clemons, Beanie Feldstein, and Awkwafina are all charming as Shelby’s fellow Kappa Nu sisters, each seamlessly complementing the other’s skills. But the true star here is Efron, who has never been better than his work in this film series. Teddy’s journey from young man to adult is much bumpier than his friends’ attempts to grow up, and his desperate need to be accepted by others fuels his evolution into a full-fledged male sorority sister (and his heartbroken response after he’s kicked out). Though his party-animal-turned-grown-man shtick could have become a one-note joke, Efron, director Nicholas Stoller, and the team of screenwriters (Stoller, Rogen, Evan Goldberg, Andrew J. Cohen, and Brendan O’Brien) turn Teddy’s arc into the most compelling aspect of the film.

The same can’t be said for Mac’s buddy and co-worker Jimmy, who’s an unfunny dimwit. Ike Barinholtz is capable of adding offbeat laughs in other projects (such as Sisters, The Mindy Project, and Eastbound & Down) which is why it hurts to see him slumming here as a third-rate screwup/horndog. In addition, several scenes feel focus-grouped to death, robbing them of their edge and humor in order to ensure that any subtext is either eliminated or reduced to lame, tacky dialogue. Neighbors 2 is at its best and most authentic when it dares to take on the double standards and lascivious treatment that women are often subjected to, which makes some of its hacky, one-dimensional jokes feel especially out of place.

Ultimately, this movie is akin to watching a sports legend later in his or her career: smarter in terms of execution and periodically achieving transcendence, but lacking the consistency to still be considered elite. That said, this is the rare sequel that not only feels welcome and worthwhile, but perhaps even important thanks to its refreshing message of female empowerment. Neighbors 2 effectively holds up a mirror to society, promoting gender equality in a comedic fashion while shutting down some of the “boys will be boys” excuses that even the previous film occasionally indulged in (Teddy chastises a buddy at one point for using the term “bros before hoes,” a moment played straight to great effect). By combining the pratfalls and ribaldry we all know and love with a progressive take on feminism and the college experience, this sequel offers up a party that audiences will remember fondly.