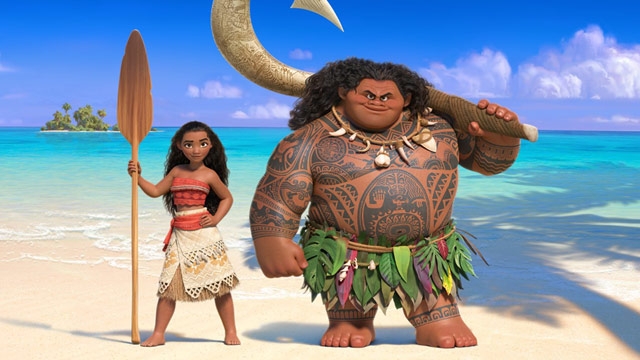 Moana (voiced by Auli’i Cravalho), the titular princess of Disney’s most recent animated endeavor, is the daughter of a tribal chief on an island called Motunui. Like many of her fellow Disney royals, she was raised with a set of expectations; but unlike them, she isn’t being groomed to be married off to the most eligible suitor. Instead, she is to become the chief of the island and lead her people to prosperity…but with one caveat imposed by her father: She is not to go beyond the reef surrounding Motunui, despite the fact that she has felt restless and drawn to the sea her entire life.

When the island is endangered by an ancient curse, independent Moana decides to take charge. In order to end the scourge, she must find the demigod Maui (Dwayne Johnson) and a jewel that he supposedly stole a thousand years ago. Following the encouraging words of her grandmother, she embarks on an epic sea voyage beyond her comfort zone with an unlikely companion—a wonky chicken named Heihei (Alan Tudyk).

Moana’s Polynesian folklore imbues its traditional coming-of-age arc with an exciting newness. The magnificent soundtrack, created by frequent Disney collaborator Mark Mancina, Hamilton visionary Lin-Manuel Miranda, and Opetaia Foa’i of the South Pacific band Te Vaka, anchors the story in this culture and helps drive the plot forward. The animation is positively breathtaking, enchanting viewers with glittering night skyscapes, lush island paradises, and, most excitingly, an eerily neon, almost Lovecraftian underwater “realm of monsters.” (Be on the lookout for a hysterical glam-rock number in the realm of monsters, performed by a giant, treasure-hoarding crab voiced by Jemaine Clement).

Though the film does lag a bit during some of the lengthier scenes at sea (and its sweet, heartwarming conclusion is completely predictable), the music, characters, and constantly changing scenery keep Moana feeling like a fun ride. Auli’i Cravalho and Dwayne Johnson, both of Polynesian heritage, are perfectly cast as Moana and Maui: Their sibling-like banter and heartfelt conversations add authenticity, depth, and humor to the story. Watching the fiercely independent and quick-thinking Moana come into her own during her magical, musical journey across the ocean and through the realm of ancient gods and monsters is an inspirational treat, one that will surely delight kids and adults alike for many years to come.