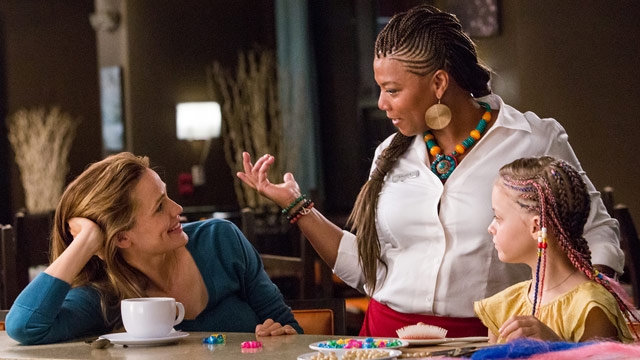 A story that would be too amazing to believe if it wasn’t based on true events is retold in this faith-based film from director Patricia Riggen. Jennifer Garner plays Christy Beam, the author of the book this movie is adapted from, who’s a devoted mother to three girls. The devout, God-fearing Beam family, which also includes veterinarian patriarch Kevin (Martin Henderson), is shaken when daughter Annabelle (Kylie Rogers) is suddenly unable to digest anything she eats, resulting in constant pain and a bloated stomach. After several misdiagnoses, they learn that she has pseudo-obstruction motility disorder, a life-threatening condition that attacks the intestines. She is forced to take in food through a tube, and is mostly confined to a hospital bed and a couch at home. Christy becomes despondent, asking why her God would put a well-mannered, good-natured child through such pain. Anna receives acts of kindness from a handful of strangers and a classmate, but her life changes forever when she falls 30 feet into a tree that she was climbing with her older sister Abbie (Brighton Sharbino). Inexplicably, Anna is not only unharmed by the fall, but her disorder vanishes and she returns to full health.

It’s incredible to think that this feel-good story is actually true, and the movie is grounded by assured performances and some standout cinematography. Director of photography Checco Varese (whose credits include Prom Night and last year’s drama The 33) proves adept at making each setting, whether a dimly lit urgent-care room or an idyllic representation of heaven, look simultaneously striking and authentic. Likewise, casting directors Justine Hempe and Sheila Jaffe deserve praise for finding the trio of actresses who play the young daughters, as they are asked to take the lead in some of the film’s more emotional scenes: Rogers and Sharbino turn in hefty portrayals, and Courtney Fansler is quite charismatic as the youngest daughter Adelynn. The movie is also bolstered by the aw-shucks charm of Henderson, as well as Queen Latifah’s performance as Angela, a kindhearted Boston waitress/aspiring financial planner who lifts Anna’s spirits as she waits for an appointment with the highly respected Dr. Nurko (Eugenio Derbez).

Between its faith-filled source material that’s begging for a cinematic treatment and a roster of capable actors, Miracles From Heaven seems primed to make an impact at the box office. However, the film itself is undermined by a clunky script that’s full of flimsy attempts at humor and forced overtones of religious persecution. Rather than trying to court a wide audience with its optimistic message and espousal of admirable values, the movie depicts Christy as being ostracized for her lack of faith following Anna’s diagnosis. Some of her fellow churchgoers respond to Anna’s condition with reprehensible suggestions that seem to come out of nowhere, and most of the people the Beams encounter outside of their inner circle are seen as stodgy and rude for no apparent reason (including a young doctor who rolls his eyes while handing off Anna’s chart, because apparently he can’t endure even a single question from Christy about her daughter’s ailment). The movie wants to argue that people often find their best qualities during moments of crisis, but at various points, it ends up creating an us-vs.-them dynamic based on one’s religious beliefs.

The film almost ends with a nice coda in which Christy discusses the spiritual goodness we all carry inside of ourselves, but then the script shoehorns in another meaningless outburst that reinforces a somewhat dogmatic streak. Overall, though, Miracles From Heaven is a moving drama when it’s able to combine its faith with its story arc in a genuine manner.