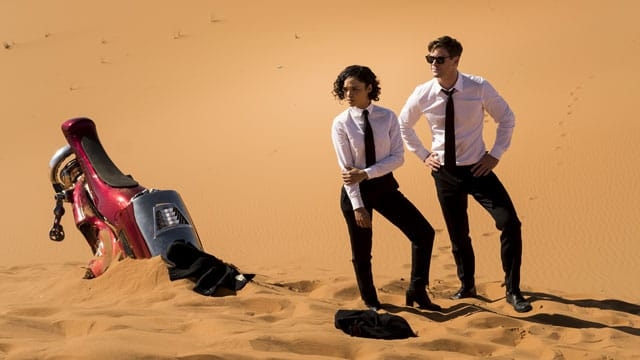 A very familiar and hollow story unfolds as Men in Black: International chugs along. Many veteran Men in Black fans will know exactly what they are getting into, which makes International a borderline moot exercise. In the past, the franchise was able to salvage its repetitive loop of alien discovery and extermination with quirky humor and memorable supporting characters. This latest incarnation winds up severely lacking in this aspect, as most of the jokes fall flat, and the miniature alien sidekick the filmmakers are clearly hoping will be the breakout character, is a completely lackluster companion. Entertaining in spots but mostly forgettable, Men in Black: International is an uninspiring reboot for which no one was particularly clamoring.

Agent M (Tessa Thompson) has dedicated her entire life to becoming a MiB agent, after watching her parents get neuralyzied (the silver tube that erases memories) when she was a young child. After years of hard work and a little bit of luck, M finds an MiB office and demands to be recruited. For her inaugural mission, she's sent to London to sniff out a potential mole in the MiB's UK branch. There she meets with the decorated Agent H (Chris Hemsworth), and the two embark on a journey that has them investigating dangerous alien activity, as they try to save the world from destruction.

MiB: International starts out with a short montage of M becoming an MiB agent, allowing her (and us) to marvel at her new workplace. The film falters from the moment Agent M meets Agent H, as they go gallivanting across the globe, destroying alien scum while trying to unravel a mystery. Hemsworth and Thompson don’t display the type of chemistry they showed off in the MCU as Thor and Valkyrie, thanks to a lack of engaging dialogue and countless attempts at failed humor. Their little alien friend, Pawny (voiced by Kumail Nanjiani), is cute sidekick who doesn’t offer much besides the occasional light-hearted quip and the potential to become a Happy Meal toy.

It's not an entirely dire affair, as some action scenes are truly entertaining, and the movie retains some of the charm of the original's ridiculous future-tech weapons and over-the-top explosions. Unfortunately, the story isn’t engaging enough to provide a backbone to these scenes, and at the end of the film, the entire scope of the MiB universe comes off a bit hollow.

Despite the throwbacks and winking mentions to its predecessors littered throughout, Men in Black: International doesn't stick the landing as a promising reboot for the dormant franchise. Only the box office, and not any creative ambitions, will dictate the road ahead.