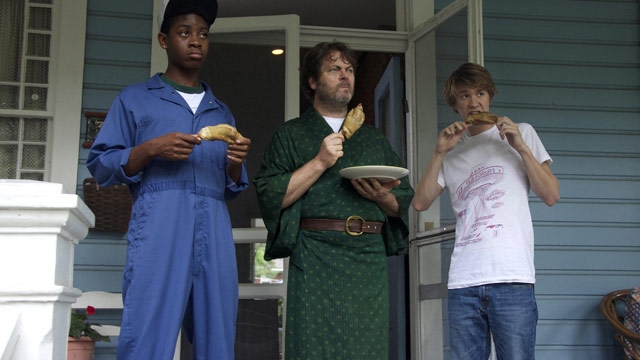 Me and Earl and the Dying Girl is a high-school drama with real stakes but no romance, which is plainly stated by the main character’s voice-over narration. The movie centers on the platonic connection between Greg Gaines (Thomas Mann), an angsty, painfully awkward teen, and Rachel Kushner (Olivia Cooke), a classmate of his who has been diagnosed with leukemia. He initially visits Rachel at the behest of his mother (Connie Britton), but as the two eventually grow closer, she gets involved in his pastime of creating film parodies with his friend/"work associate" Earl Jackson (RJ Cyler). Greg narrates their adventures while writing a story about their bond, which allows the movie to utilize gimmicks like onscreen text that reads "Day 9 of a Doomed Friendship." Based on a 2012 novel by Jesse Andrews, Me and Earl and the Dying Girl knows it’s a sentimental tearjerker, but it uses sarcasm and twee visual aids to try to connect with audiences who wouldn’t normally watch young-adult fare.

Sadly, this film falls flat because it shamelessly leans on the very tropes it claims to be subverting, and it doesn’t even manage to present them convincingly. Andrews, who adapted the screenplay from his novel, makes Greg so annoying and unsympathetic at times that it’s difficult to stomach the fact that the entire movie revolves around him. In addition, a story dealing with matters of life and death could probably do without the clichés of "character A offends character B before reuniting in a way that requires a heavy dose of symbolism" or "friends pick a fight for no good reason," not to mention the sort of self-hating dialogue that lacks any sense of authenticity. The picture feels like it was written by a fortysomething adult trying to imagine how other people’s kids talk and act. Even worse, the script is incredibly lazy when it comes to such details as character development and plot.

Greg makes a big deal about how "hot girl" Madison (Katherine Hughes), and the hot girls in high-school movies in general, exist only to stomp on the hearts of gawky, stammering boys just trying to get by (cleverly illustrated by a felt diorama involving a squirrel and a much larger buffalo). However, it’s never adequately explained why Madison is a part of this story at all; she isn’t friends with Greg or Rachel when she randomly decides to eat lunch with them, and it’s even odder that she becomes so invested in creating a special gift for Rachel (or, more accurately, telling Greg and Earl to create it). It’s obvious that a number of plot threads that were fleshed out in Andrews’ novel were left unfinished or unaddressed due to time constraints or studio intervention. As a result, we’re left with needless exposition like Greg bemoaning his problems or berating himself for his lack of conventional good looks and charm (he repeatedly describes himself using "gerbil face" and "awkward"), which makes it abundantly clear that the filmmakers don’t trust their audience to understand the basic dynamics of the scene they’re watching.

These glaring issues become even more frustrating when you realize that most of the actors in this film are vastly superior to the material they’ve been given. Mann (previously best known for appearing in the 2012 comedy Project X) provides strong emotions and clearly understands the essence of the story (despite the maudlin, languid dialogue he’s forced to deliver), while Cooke is a legitimate find as the "dying girl" of the title. Connie Britton and Nick Offerman, playing against type as progressive parents (amusingly, Offerman is often seen strutting around in a robe), are as professional and capable as you’d expect — not too surprising, given the indelible television characters they’ve brought to life in the past (Friday Night Lights’ Tami Taylor and Parks and Recreation’s Ron Swanson, respectively). Speaking of great television actors, Me and Earl could have used more of The Walking Dead’s Jon Bernthal as Mr. McCarthy, the cool, tattooed history teacher every student wishes he or she had.

Perhaps the most interesting character in Me and Earl and the Dying Girl is Earl himself, who’s played with effortless swagger and confidence by Cyler. He delivers some of the funniest, most genuine lines in the entire film, and he finds the abandoned kid and faithful friend hidden behind Earl’s nonplussed demeanor. It’s obvious that there’s much more to his backstory than what we see here, which is a real shame because Earl is so compelling. Unfortunately, the movie is too busy following Greg and his C-grade Holden Caulfield-esque plot line to spend more time on the supporting cast. The film is trying so hard to be cool and unique that it ends up as an artificial, overwrought mess. Me and Earl and the Dying Girl has style, but not the substance to do it justice.