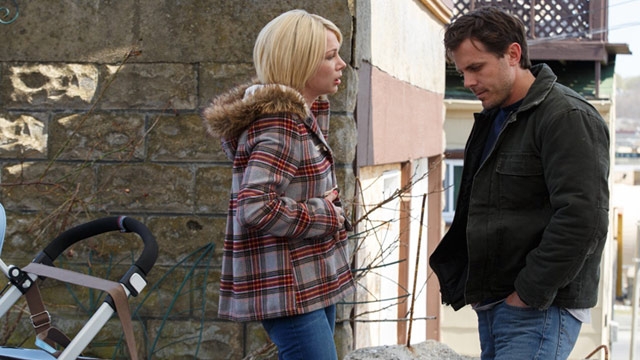 There’s a scene early on in Manchester by the Sea where an apartment-complex handyman stands next to a tenant frowning at his dripping bathroom tap and listens to him go back and forth about what he should do. Is it the washer? Or something worse? Is it worth it to replace the whole faucet? How long do you think it’s going to take? This static and deadpan scene is one gutsy way to start a two-plus-hour movie: Oh no, the veteran filmgoer groans, is this a “dripping faucet” picture? Where the director will ruminate on the minutiae of existence and noodle along unconcerned about drama, conflict, or the rapidly fraying patience of the people with their butts in the seats? Thankfully, no, that’s not the case for Manchester by the Sea, a carefully observed portrait of a few months in the life of that handyman, and the little respite of redemption they provide.

Lee the handyman (Casey Affleck) lives a monastic life in the Boston suburb of Quincy (or “Kwinzy,” one of many shibboleth details Massachusetts native Affleck and writer/director Kenneth Lonergan get right). He spends his days tending to tenant complaints, and at night he sleeps in a basement room not quite good enough to be rented out as an apartment. Some of the women in the building, and at the bar he frequents—and “frequents” is the right word—are swayed by the scruffy allure of his “strong, silent type,” but they can’t turn his head. His main emotional outlet is punching other men. “Do you know me?” he slurs as he drunkenly corners two loosened-tie types on the other side of the bar who shot too many meaningless glances his way. “Because you’re looking at me like you know me.” What they don’t know is that, back in his hometown of Manchester, he is the guy people whisper about, and his self-imposed exile in Quincy is a penance that never stops.

To give away too much about the plot would do this movie a great disservice, because it’s a joy to watch the unfolding of all of its truths and secrets—told a bit clumsily at first, in a shuffled deck of too jarring flashbacks, but settling into a groove by the hour mark (again, a gutsy move) as Lee learns how his responsibilities to a teenage nephew (Lucas Hedges) have changed. This is a rare melodrama set in the world of men, where the only emotion permitted in their gruff, working-class culture is anger—but what a rich anger it is, so shaded and nuanced since it must stand in for every other type of feeling, from grief to terror to shame to concern to intimacy and happiness. The criticism can be made that this movie doesn’t like women very much, casting them as both prickly enforcers of the social order and as the sole gatekeepers to a realm of unbridled warmth that men crave and cannot gain entry to alone. But this is not their film, and their protocols—for instance, correctly reading the neutral question “How are you doing?” as an invitation to spill one’s guts—are not germane to Lee’s journey. Manchester by the Sea wisely allows him to walk his path on his own terms, gathering courage along the way.

Three performances stand out. Casey Affleck never missteps with his close-to-the-vest portrayal of a quietly troubled man. Michelle Williams, as a woman who was once very important to Lee, is the richest female character in the film, growing from a working-class harpy to someone who’s found some gentleness and grace after life has made her walk through a crucible of fire. Also notable is Lucas Hedges, a young actor who is asked to shoulder a lot of the story’s emotional heft in a few key scenes, and who does so with verisimilitude that seems beyond his years. The only design flaw in this film is the number of minor speaking roles—more than 20, at least. You can’t cast all of these parts with A-list actors, and the less skilled performers crack the veneer of realism that Manchester by the Sea takes great pains to replicate, right down to the details of all of existence’s little mistakes: the car locks that don’t unlock, the frozen meat that falls out of the freezer; the cell-phone conversations in out-of-synch echo; the invitations and intimations and second chances never taken, until the day they finally are. Is this a dripping-sink movie? Yes, and after it wins your patience, you won’t want it to end.