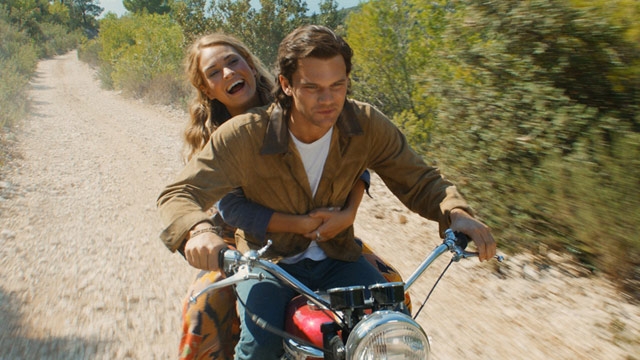 A decade after the campy rom-com based on the Broadway musical Mamma Mia! hit the big screen, the band is back together, minus one crucial player. The lack of magnetic performer Meryl Streep is evident in the sequel, which scrambles to fill the void with unnecessary storylines, over-complicated camera work, silly slapstick, young hunks, and more. Mamma Mia! Here We Go Again is like cotton candy. It’s fine for a few bites until it becomes sickeningly sweet and you’re dying for something of substance…or even just an ABBA tune you actually recognize.

Outside of ABBA’s greatest hits, such as the titular “Mamma Mia” and “Dancing Queen,” most of the sequel’s music consists of the B-sides that only superfans will recognize or the songs so bizarre that the writers of part one couldn’t figure out how to shoehorn them into the plot. Sadly, the movie only manages to cross that fine line from cringeworthy into campy fun just a few times, with the highlight being the absurd, unlikely incorporation of the song “Waterloo.” The number is set in a French cafe and features a comically large Napoleon hat, a baguette sword fight, and the most charming of young Donna’s suitors, Harry, played by Hugh Skinner. The number is also notable for its inclusion of a dance ensemble member in a wheelchair, a bright spot of diversity in the cast.

Besides “Waterloo,” the sequel’s other musical victory is in its restraint. Pierce Brosnan‘s singing, a tragedy to even the most ardent fans of the first film, was kept to a bare minimum.

Unfortunately, with so many plotlines past and present to get through, scene stealers Christine Baranski, Julie Walters, and Colin Firth are underutilized or given subpar songs. While most of them have become more cartoonish versions of their original characters, Amanda Seyfried mostly looks sad and wide-eyed and lamely states exposition. Oscar nominee Andy Garcia is only there so that Cher has a reason to sing during her brief appearance, which is confusing, out-of-place, and dispassionate, and yet somehow works because it’s Cher.

Underlying the film is an admirable message about making your own family and not being beholden to the dreams and failures of your parents, but the romantic lessons are a bit out of whack. Every romantic plotline involves people reuniting with a lost love—the one person who was right for them but got away. While this seemed romantic for Donna (Streep) and Sam (Brosnan) in the first movie, it loses its punch when repeated again and again, and distracts from the much more special relationship that should be at the movie’s center: Sophie and her three dads.

Despite the dizzying amount of weak, unsatisfying storylines and musical numbers, the film does occasionally pause to let the audience appreciate the gorgeous scenery. And the movie’s costume and set designers worked wonderfully in harmony to weave a saturated color story of turquoise, orange, and more turquoise for good measure.

Overall, Mamma Mia! Here We Go Again appears to be a half-baked combination prequel and epilogue that zips so quickly from scene to scene and song to song that any genuine emotion is swept aside, leaving audiences only fluff and a killer credits sequence after almost two hours of their time. But for moviegoers looking for something escapist and “sweet as sugar cane” this summer, it might just hit the spot.