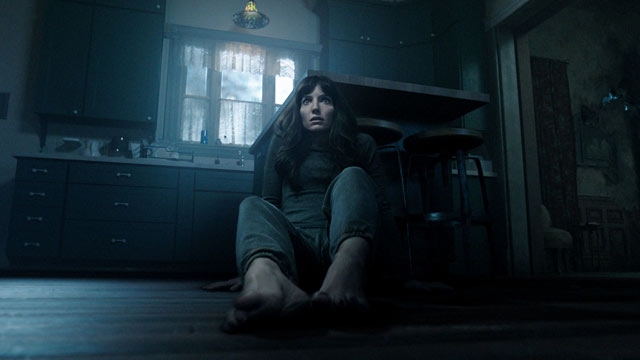 Most horror films aim to terrify their audience through a steady dose of tension and mystery. James Wan’s (Saw, The Conjuring) Malignant fails on both fronts, never offering more than an inch of curiosity or fear, all while giving a mile of nonsense. Malignant’s dark tone and laughable plot line are almost so bad that it is worth seeing just to believe it. The film’s initial moments offer a morsel of hope that it could be good, but those moments fade soon thereafter. Usually, a horror flick like Malignant will frighten the audience, whether through jump scares or a psychological drain, but the audience gets none of that here. Wan’s idea is unique, but as viewers will find out by the third act, it was also incredibly dull.

Madison Mitchell (Annabelle Wallis) has endured a tough life. After suffering multiple miscarriages, and surviving an abusive husband, things are finally starting to look up for her. With a new baby on the way, Madison finally lets herself feel hopeful again; that is, until a disaster strikes her and her husband. Madison is attacked and her husband is murdered, triggering an investigation by detectives Kekoa Shaw (George Young) and Regina Moss (Michole Briana White). Madison reveals to her sister, Sydney (Maddie Hasson), that she has been witnessing brutal murders, through dreamlike visions, as they happen in real time. As the victims are identified, everyone begins to unravel what is really going on; Gabriel, Madison’s evil imaginary friend of her past, is back.

The story may have sounded good on paper, delving into the psychological past of a tormented soul could be interesting. Unfortunately, this is not executed well at all, and Malignant becomes a laughingstock. Wan has been able to deliver on some unique and odd ideas in the past, but the core of a good horror movie should revolve around one thing: fear. Without fear, Malignant’s ridiculous story is exposed, and at that point the movie becomes a total failure. To be fair, Wan did have some cool ideas with how Malignant is shot, highlighted by a top-down “dollhouse” view of Madison escaping through her home. Unfortunately, there is just not enough creativity overall for anything to really stand out.

The acting is suspect as well, infused with stiff and awkward character interactions that seem to never end. The few attempts at humor fall flat, although the film would have gone a long way if it took itself less seriously. Wallis’ performance isn’t bad here, but she is given absolutely nothing to work with, including her surrounding cast.

In Malignant, we’ve seen the absolute worst of James Wan, as his latest idea doesn’t settle well on the big screen. A tone of arrogance seems to appear in his delivery, or maybe he was just blinded by his vision. The dark, ominous setting and surprisingly good soundtrack are not enough to save this supernatural dud. Malignant is boring, and its spoiler-infused payoff is fleeting. This film may not be forgettable, it won’t be for the right reasons.