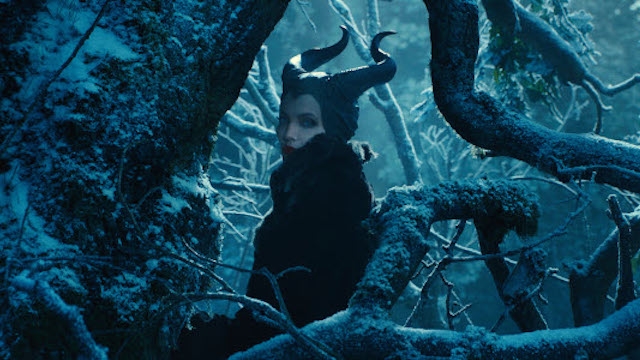 Maleficent, Disney’s live-action reworking of their own Sleeping Beauty, has one very good idea at its core, but a lack of narrative drive and the soulless, state-of-the-art look of the whole thing keeps director Robert Stromberg’s debut feature from ever blossoming into something genuinely interesting.

Angelina Jolie stars as the title character, who, as a teenager, is a powerful and respected winged fairy helping to rule a magical land full of strange creatures. Her homeland borders a country that is populated by humans and run by the cruel King Henry (Kenneth Cranham). One day, Henry’s son Stefan (Jackson Bews) traipses into the fairy’s land and meets Maleficent, causing the two crazy teens to fall into forbidden love.

Year later, Henry seeks to take over the magical land next to his kingdom, but is thwarted in battle by Maleficent. He demands revenge, and eventually his now-grown son Stefan (played as an adult by Sharlto Copley) succeeds by betraying the fairy and clipping her wings. In response, an infuriated Maleficent swears revenge on Stefan; she gets her chance when the prince becomes king and has his first child, a daughter named Aurora (Elle Fanning)—as Sleeping Beauty fans will remember, Maleficent curses her to fall into a death-like sleep after pricking her finger on a spinning wheel on her 16th birthday.

Stefan demands that all of the spinning wheels be collected, and orders his daughter to be secretly raised in the woods by three good-hearted but dim-witted fairies, who will return her to him the day after her 16th birthday. However, Maleficent refuses to stay away from Aurora and ends up developing maternal feelings for the girl, eventually inspiring her to try to undo the curse she placed upon the princess.

Stromberg made his name in production design and visual effects, and that fits with what’s onscreen: Everything has been overdesigned and CGI’d to within an inch of its life. First and foremost, the three fairies tasked with raising Aurora are small, flying creatures who have the faces of the actresses playing them (Imelda Staunton, Juno Temple, and Lesley Manville) grafted on, and it’s just as visually incongruous as when it was done for the dwarves in Snow White and the Huntsman. It’s such an off-putting effect, as is whatever combination of prosthetics, makeup, and CGI tricks that went into shaping the title character’s cheekbones. The result doesn’t bring to mind the original, animated Maleficent so much as memories of Jack Nicholson’s the Joker.

All of that design work would be easier to appreciate if the movie were fun to look at, but cinematographer Dean Semler’s dark palette is rendered a muddy mess once you throw on 3D glasses, and Stromberg’s direction has no sense of wonder or individual personality. Maleficent feels like it was made by a committee without a head.

Jolie has an absolute blast chewing up the scenery: She’s a forceful, welcome presence, even if her character’s cheekbones remain a distraction throughout. Jolie is a star whose massive celebrity and exotic sex appeal have left her unable to play normal, everyday people, and in that regard, you can see why she was intrigued by this fantastical character. But in the end, this feels less like a role she was creatively invested in than a very obvious and safe move to shore up her box-office bona fides four long years after her last hit, 2010’s Salt.

The idea of remaking a classic fairy tale from a new point of view is certainly a viable one, as the success of Wicked attests. However, the biggest change to Sleeping Beauty here—aside from giving Maleficent such a detailed backstory and a shot at redemption—will make for interesting viewing only if you’re unaware of Disney’s previous blockbuster, Frozen. Maleficent borrows that film’s emotional climax, raids movies like Where the Wild Things Are, Avatar, and the aforementioned Snow White and the Huntsman for creature designs, and ends up feeling like just another piece of Disney branding.