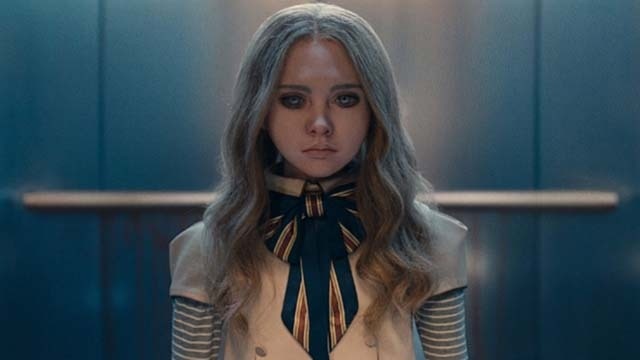 With a screenplay by Akela Cooper (Malignant ) from a story by James Wan (Aquaman), audiences should expect some disturbing horror from the Gerard Johnstone (Housebound) directed M3GAN. They won't be disappointed, as the film is an unusual and entertaining version of the story of a friend that goes too far. It also asks some interesting questions about the line between robotics and humanity.

Gemma (Allison Williams) is a robotics engineer working in a high-pressure toy company laboratory. After a violent automobile accident causes the death of her sister and brother-in-law, she suddenly becomes the caretaker for her niece Cady (Violet McGraw). Due to this, Gemma finds herself caught between her work and learning to be a parent - something for which she is unprepared. A solution is combining the two when Gemma pairs Cady with her latest robotics project, M3GAN (Amie Donald and Jenna Davis). As a failsafe, she makes herself M3GAN's secondary function. Unfortunately, M3GAN evolves as she learns and begins to take her role as Cady's caretaker and friend a bit too literally. Whenever she feels that Cady is threatened, M3GAN takes matters into her own deadly synthetic hands. It isn't long before M3GAN decides that Cady is all that matters, and nothing else will stand in the way of her programming parameters.

There is a lot to unpack in Cooper and Wan's script. The overall concept is original and changing with the times, but a lot here is familiar, too. Everyone has seen the caregiver gone awry, the crazed doll, the jealous other woman, and the murderous robot. All of these are here, almost to the point of nodding to what came before. But the writers choose to throw just enough humor into the script to keep the film entertaining, well-paced, and a bit campy. There are instances when the story progression moves a little too quickly, but this only happens occasionally. Between too fast or too plodding, faster is better. Johnstone's direction of the actors is good, and McGraw gives a compelling performance as a little girl lost and then found – clinging to the one thing that gives her comfort in her grief.

One of the best aspects of M3GAN is that instead of relying too much on CGI, the doll is physically performed by Donald, wearing incredible prosthetics enhanced slightly by CGI. She uses her dance training and does her own stunts, too, giving a chillingly memorable performance. All this creates a very creepy human/not-human vibe to the character down to the last disturbing moment. Davis's voice acting for M3GAN is delightfully reminiscent of other computers gone mad – another seemingly intentional nod.

M3GAN may remind viewers of other films, but not so much or so often to keep it from being a solidly entertaining movie with a memorable new horror icon. It also has several messages – primarily that AI and an excess of surrogate parenting through technology are forces that shouldn't be toyed with.