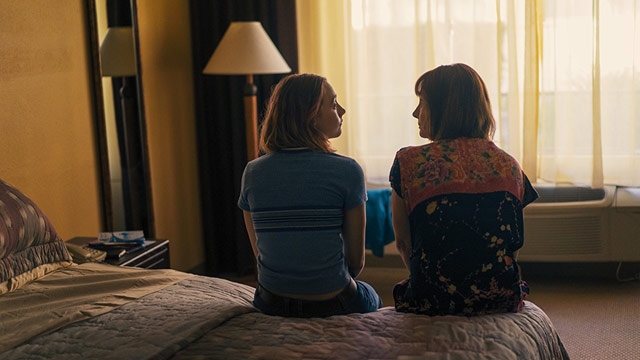 “Anybody who talks about California hedonism has never spent a Christmas in Sacramento,” author Joan Didion once remarked, and her incisive quote is the first thing audiences encounter in Greta Gerwig’s Lady Bird, her luminous solo writing and directing debut. Gerwig, who, like Didion, grew up in Sacramento, based the story on her own experiences living there. The film chronicles the 2002-03 school year in the life of Christine “Lady Bird” McPherson (Saoirse Ronan), a restless 17-year-old senior who longs to leave the “Midwest of California” (as she calls her hometown) and attend college in New York City, “where culture is.” Unfortunately, her parents can’t afford an elite Manhattan school and, as her mother Marion (Laurie Metcalf) keeps reminding her, she isn’t smart enough to get into them anyway. But that doesn’t faze Lady Bird. She is, if nothing else, determined.

During the school year, Lady Bird (the moniker is a pet name Christine gave herself in an effort to exercise independence) auditions for her Catholic school’s annual musical (Stephen Sondheim’s famous flop, Merrily We Roll Along); dates a couple of polar-opposite guys; anxiously awaits replies from prestigious East Coast colleges she’s applied to; dumps her best friend Julie (Beanie Feldstein) in a wrongheaded effort to hang with a cooler crowd; and continually butts heads with her no-nonsense, overworked mom. If all this sounds rather routine for a coming-of-age story, you’re right. But what makes Lady Bird special is Gerwig’s unique take on it all. The film is disarmingly simple but not simple-minded, sweet but not sentimental. It is by turns tender, furious, funny, heartbreaking, illuminating, and, above all, honest. There isn’t a false moment in it.

Lady Bird is essentially an unvarnished mother-daughter story. Lady Bird and Marion are so much alike, but neither will admit it. There’s no doubt they love one another, but they often say hurtful things in the heat of the moment that they don’t really mean. And like the old Elton John song, sorry seems to be the hardest word, especially for Marion. Metcalf and Ronan are pitch-perfect and nothing less than brilliant throughout. The film’s opening scene, in which Lady Bird and Marion drive back from a disappointing college visit, is witty and wonderful, and ingeniously sets the tone for all that follows. Lady Bird tells her mom how much she hates California and wants to attend school on the East Coast, preferably in New York, but “at least Connecticut or New Hampshire where writers live in the woods.” To which Marion wonders how she raised such a snob: “You know, with your work ethic, just go to City College, and then to jail, and then back to City College,” Marion fumes. At which point Lady Bird, having heard enough, opens the car door and tumbles to the pavement. It’s funny, sad, and shocking all at once—much like life itself—and the movie is filled with such authentic moments.

Later, Lady Bird and Marion are shopping at a thrift store and arguing as usual. Marion tells Lady Bird that she only wants her to be the very best version of herself that she can possibly be. To which her daughter replies, “What if this is the best version?” Her mom just looks at her in disbelief. Audiences, however, will likely want to give Lady Bird a hug and say, “That’s fine, we love you just the way you are.”

The Edge of Seventeen

The Edge of Seventeen