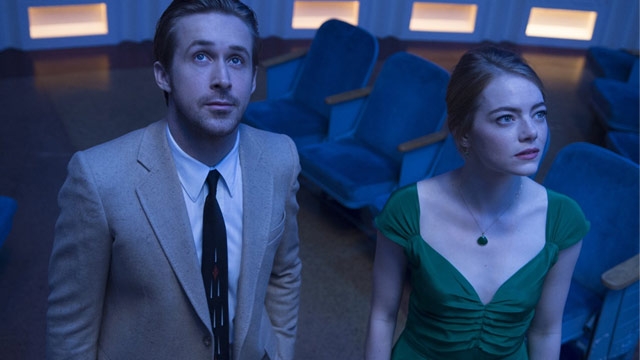 There aren’t many movies that can be declared an instant classic, but Damien Chazelle’s masterful and euphoric La La Land is one of them. From its joyous opening on a choked Los Angeles freeway, where passengers leap from their cars and burst into song and dance, to its heartfelt, lump-in-the-throat conclusion in a cozy jazz club, the film’s rapturous spirit sweeps over you in breathtaking waves rarely experienced in current American cinema. While it’s a loving homage to 1950s-style Hollywood musicals like Singin’ in the Rain, as well as to the candy-colored ’60s French New Wave fantasias of Jacques Demy (The Umbrellas of Cherbourg, The Young Girls of Rochefort), La La Land is also something wonderfully new and refreshing. You’ve never seen anything like it.

La La Land’s premise is deceptively simple. It’s a struggling boy-meets-struggling girl love story that begins on that jam-packed freeway when Sebastian (Ryan Gosling), a jazz pianist, honks his horn at the car in front of him, which is driven by an aspiring actress named Mia (Emma Stone) who’s too busy rehearsing lines to notice that traffic is moving. He then pulls alongside of her, and they glare at each other before he speeds past and she flips him off. From there, their paths continue to cross and it’s obvious they are smitten with one another, even if they refuse to admit it. Their burgeoning romance is perfectly captured in a beautiful song-and-dance number (“A Lovely Night”) set high above L.A.’s glistening cityscape. Sebastian sings to Mia: “Some other girl and guy would love this swirling sky, but there’s only you and I, and we’ve got no shot. This could never be; you’re not the type for me.” But boy is she ever his type, and he knows it. Chazelle shoots the sequence in one long, full-bodied take that showcases the gorgeously choreographed routine without cheating inserts or cutaways. But perhaps the most romantic scene takes place in a darkened revival movie theater, where the nervous couple meet on their first date. Who knew that the mere sight of fingers touching could make one’s heart beat so fast?

As Sebastian and Mia’s relationship grows, they push each other to make their dreams come true. For him, that means summoning up the courage to leave a well-paying gig in a jazzy pop band fronted by a rival performer (an excellent John Legend) to open his own nightclub; for her, it means quitting her barista job on the Warner Bros. lot to pursue acting full time. Sebastian explains to the jazz-averse Mia that the essence of his music involves conflict and compromise. And those words take on far-reaching meaning when their dreams start to impinge on their future together. As Sebastian sings: “Is this the start of something wonderful and new, or one more thing that I cannot make true?”

As good and glorious as La La Land is, none of it would work without its two charismatic leads, who are pitch-perfect and have more chemistry together than perhaps any other movie couple in recent memory. Stone has never been better. Her airy voice is authentic and vulnerable, and her gift for comic timing is on full display here. This is also a high-water mark for Gosling. His elegant, fragile singing isn’t overpowering, but it is formidable in its simplicity and purity. The pair sound like honest-to-goodness folks with whom you can easily relate. The music and score by Justin Hurwitz are simply dazzling, and the lyrics by Benj Pasek and Justin Paul (Smash, the Broadway musical Dear Evan Hansen) perfectly capture the elation and jitters of new love.

La La Land is a magical journey, but it’s no fairy tale. Chazelle’s concise yet multi-layered script eschews sentimentality and is more bittersweet, and thus more realistic, than is perhaps expected. While it’s an unapologetic love letter to the City of Angels and the dream factory it houses, it’s also wise and clear-eyed. Even so, La La Land is sure to inflame Tinseltown passions worldwide. As Mia sings: “Here’s to the ones who dream, foolish as they may seem.”