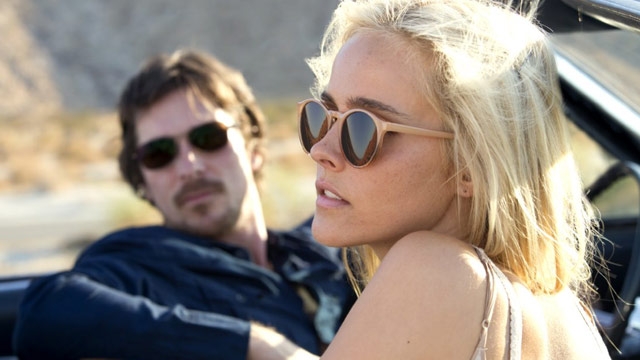 Polarizing filmmaker Terrence Malick continues his decade of uncharacteristically high productivity with his seventh feature, the meditative, melancholy, and terrifically moving Knight of Cups. Christian Bale stars as Rick, a successful Hollywood screenwriter drifting through life who’s troubled by his past and unmotivated by events in his present. He spends his nights cavorting with beautiful women, and his days being hounded by agents desperate for his work. Along the way, Rick reconnects with his struggling younger brother Barry (Wes Bentley) as both of them grapple with the suicide of their sibling Billy some years earlier. The two men must also deal with their aging father Joseph (Brian Dennehy), who towers over their family. Once a successful Hollywood figure himself, Joseph has been broken down by a hard life. He is critical of Rick’s indulgent lifestyle, and regularly gets into ferocious arguments with Barry. These tenuous family relationships form the crux of Rick’s pain.

Meanwhile, Rick falls into and out of passionate love affairs with six different women, each of whom are simultaneously asking profound questions of him and pushing him towards the answers he so desperately seeks. In turn, he encounters his ex-wife Nancy (Cate Blanchett), young free spirit Della (Imogen Poots), wise-beyond-her-years stripper Karen (Teresa Palmer), photoshoot model Helen (Freida Pinto), married Elizabeth (Natalie Portman), and innocent Isabel (Isabel Lucas). Though often displaying a stoic attitude, as is common with Malick’s male leads, Rick is driven to each woman by his unreliable and constantly changing emotions. Despite his deeply felt connections to women, his family, and the world, he exasperatedly remarks, “There’s so much love inside us that never gets out.” It’s an affecting moment that touches on the vulnerability and limitations within all of us.

Knight of Cups uses religious texts, some of which are directly quoted via Malick’s trademark use of voice-over, as a loose allegory for Rick’s crisis and search for meaning. The film is divided into several chapters, most of which are named after tarot cards (The Hanged Man, The High Priestess) that signal the introduction of a new character in Rick’s odyssey. Each person floats into his life, makes an impact, and then drifts away in this dreamlike parable.

Malick has set his films in a wide variety of milieus (such as the sorrowful Midwest in Badlands, Colonial Virginia in The New World, and the placid small towns of 1950s Texas in The Tree of Life), but his immersion in contemporary Los Angeles has reinvigorated the auteur’s explorations of love, loss, family, and mortality. Opulence and excess are the norm in Rick’s life, and viewers bear firsthand witness to that frequent hedonism. Yet the underbellies of L.A. and Las Vegas provide the perfect juxtaposition for his existential crisis. We see lavish, celebrity-filled parties at mansions, but they feel surreal when paired with scenes of Rick and Barry walking through the desperation of Skid Row. Even still, all of these human pursuits seem downright alien when the setting shifts to Death Valley and other natural wonders of California.

Director of photography Emmanuel Lubezki, whose work on The Revenant made him the first person in history to win three consecutive Oscars for Best Cinematography, collaborates with Malick for the fourth time in Knight of Cups. Simply put, his craft is as singular and evocative as the film industry has seen in quite some time. Lubezki strings together another gorgeous collection of images in Knight of Cups, using a mix of tight Steadicam and wide-angle shots.

Malick has, particularly during his recent renaissance, unabashedly forged his own cinematic path, one that is defined by a vision and tenor immediately recognizable as his. While some see his work as transcendent filmmaking, to others it understandably seems like brazen self-indulgence. As the director continues to examine humanity’s struggles with the natural and mystic forces of the world, he’s abandoned any sense of traditional narrative structure, opting instead to break his movies down into fragments of brilliance. At a home resembling a Japanese rock garden, a peaceful, elderly man (author Peter Matthiessen, who passed away shortly after filming) speaks to Rick about the simplicity of Zen monks who made their homes in caves, and the difficulty of living life unfettered from distraction in the modern day. He leaves Rick with the simple thought that the only certainty he will ever know is within each passing moment. It's one of many reflective moments in this picture, but it could also act as a road map for taking in the ephemeral wonder of Malick’s imagery in Knight of Cups.