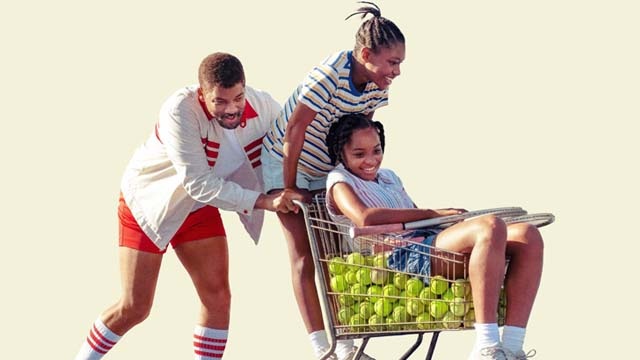 In King Richard King Richard, Will Smith (The Pursuit of Happyness, Aladdin) delivers a provoking performance as Richard Williams, the father of star tennis player sisters, Venus and Serena. For the last 30 year,s the sisters have made tennis history, but King Richard aims to tell the tale of how their father contributed to their success. Directed by Reinaldo Marcus Green (Monsters and Men) and executively produced by the Williams sisters, the film focuses on the man whose determination, ambition, and sometimes overweening ego helped make his children champions.

When the movie begins, the patriarch is seen coaching his daughters Venus (Saniyya Sidney, Fast Color) and Serena (Demi Singleton, Godfather of Harlem), hosting after-school practices on a rundown tennis court where gang members gawk at the girls and occasionally beat up their father. But Richard has a plan. Instead of his own American dream, he wants it for his children. The political dimension of King Richard is explicit throughout, not only because there weren’t many professional Black tennis players in America before the Williams sisters, but also because of the racism they experienced directly. When Venus and Serena start playing in the junior circuit, all the Williamses go to support them proudly—the only Black family on the court in this predominantly white and elitist sporting tradition.

Taking the girls to the country clubs and elite academies where stars like Pete Sampras and Jennifer Capriati train, Richard assures them in no uncertain terms that they have every right to be there, despite the patronizing skepticism and outright hostility that give the term “tennis whites” a whole new meaning.
Richard doesn’t choose between being his daughters’ coach or their father, instead he beautifully rides the line of both by ensuring they can be little girls as well as champions. This father of five, with wife Oracene “Brandy” Price (Aunjanue Ellis, The Book of Negroes) follows his 85-page plan for the futures of his daughters and his favorite inspirational quote, “if you fail to plan, you plan to fail”.

Eventually the girls train under Rick Macci (Jon Bernthal, Baby Driver), who moves the entire Williams family to his Florida training facility and is forced to put up with Richard's bizarre demand that the girls not compete in junior tournaments. It's the kind of gamble that is idiotic if things don't work out, but genius if they do.

Well, the world knows how the Williams sisters turned out. And the film is able to tell their tale from a clear and relatable standpoint, turning it into a wholly American story of family, determination, and willpower. Do the Williams sisters get overlooked because their father is the focus? Not even close. This is just as much their story, and they come out shining, too. Richard is most obviously, “king” of some serious queens.