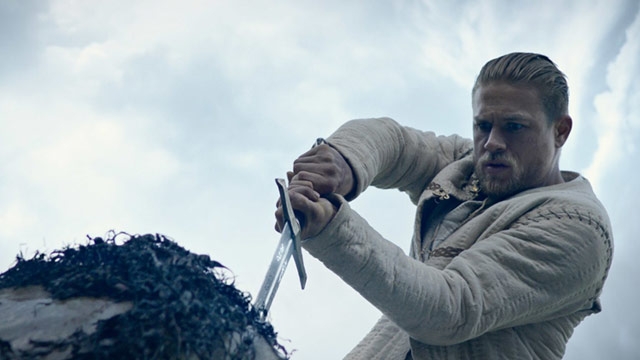 King Arthur: Legend of the Sword

When you put the medieval tale of King Arthur and a credit for director Guy Ritchie on the same movie poster, it gets your attention -- they’re both icons of British storytelling, albeit many centuries apart in style. His flashy aesthetics and tendency to make everything look like a music video -- first seen in early classics like Lock, Stock and Two Smoking Barrels (1998) and Snatch (2000) -- are still in evidence here. He uses that choppy, sped-up technique early on to make innocent kiddie Arthur grow up into muscular actor Charlie Hunnam (Pacific Rim) right before our very eyes, and while it looks cool, it leaves you with an empty feeling of disconnection from the character. Unfortunately, that lack of emotion proves to be a reoccurring theme plaguing this stylized swords-and-sorcery tale.

The rise of King Arthur and his Knights of the Round Table (reimagined here as a band of rock-star rebels) has served as the basis for movies as different as the Antoine Fuqua-directed King Arthur (2004), Disney’s animated The Sword in the Stone (1963), and the slapstick humor of Monty Python and the Holy Grail (1975). Yet this time around, the muddy visuals, hard-to-follow plot, and spectacle-over-story approach don’t quite satisfy. It’s fun to watch action scenes in which gigantic elephants wreak havoc, a football-field-long serpent dangerously slithers about, and birds attack on magical command. But when we can’t tell any of the non-Arthur characters apart, we wonder why we should even care.

After his devilish uncle Vortigern (Jude Law) murders his father and snatches away his birthright as rightful king of the land, Arthur reluctantly plucks that precious sword out of the stone and gains the power needed to overthrow the selfish ruler. Still, it would have been nice to know why Vortigern has so much hate in his heart -- is he willing to sacrifice family members just because he’s evil for evil’s sake? Also, why is Arthur so against having something most people would cherish -- supreme power -- when the sword comes into his possession? And while we’re at it, why is the iconic character of Merlin the magician missing in action? These gaping holes further undermine our interest and involvement in the story.

On a positive note, King Arthur: Legend of the Sword has quite a cast: There’s Eric Bana as Arthur’s father King Uther, Djimon Hounsou as the fearless warrior Bedivere, Game of Thrones cast member Aidan Gillen as the archer Bill, and Astrid Bergès-Frisbey as a mystical lady known as the Mage. But best in show is Charlie Hunnam, who gives an effortless, confident, and in-control performance as the king-to-be Arthur. We would have no problem seeing him talk down to vicious villains in the same cocky manner as Chris Hemsworth in the Thor movies -- but only if there were a stronger story surrounding him.