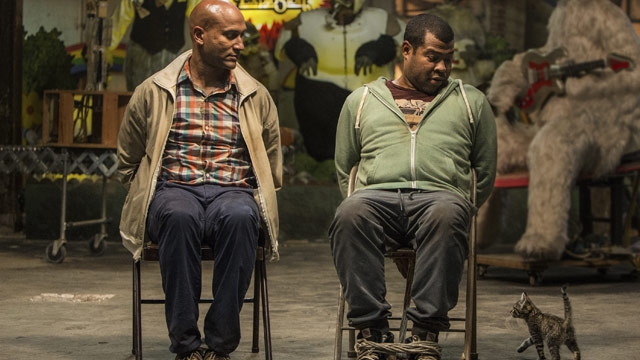 After ending their hugely successful sketch-comedy series Key & Peele this past September, Keegan-Michael Key and Jordan Peele return to the spotlight in this ridiculous, action-filled romp centered on a catnapping. Peele plays Rell, a pot-smoking photographer still reeling from a bad breakup. Key plays Rell’s dorky, high-strung cousin Clarence, a George Michael enthusiast and wearer of casual shorts, whom we meet en route to Rell’s house. Clarence is eager to cheer his cousin up, but by the time he gets to his place, he learns that Rell has already found an adorable kitten named Keanu on his doorstep; the feline not only lifts his spirits, but serves as his muse for some truly terrific restagings of classic film scenes. Two weeks later, however, the pair return from a movie to find Rell’s house burglarized and his kitten stolen. After talking to Rell’s next-door neighbor/drug dealer (Will Forte), they deduce that the crooks took the feline after breaking into the wrong home. So the pals decide to infiltrate this unsavory criminal crew and rescue Keanu from its leader Cheddar (Method Man), who has claimed the kitten as his new pet.

Clarence winds up getting in touch with his inner bad boy, becoming a sort of big brother to the male gang members while “undercover.” Rell grows closer to the crew’s lone female member, Hi-C (Tiffany Haddish), as they carry out a drug deal together (which Rell does so he can gain Cheddar’s respect and get Keanu back); along the way, they meet a famous actress who looks like she’s having a ball playing an unhinged member of Hollywood’s upper class. The overall plot is fairly absurd, and resembles a prolonged sketch that gets more outlandish and insane as it continues. Fortunately, Key and Peele’s high-powered energy is able to match the ongoing mania, as much of the comedy comes from Rell and Clarence needing to act like tough gangsters (instead of the pop-culture-obsessed nerds they truly are) in order to fit into the criminal underworld. The two former MADtv standouts are squarely in their wheelhouse with this type of fake bluster, as the pair frequently mined race and racial “code-switching” for humor on their show.

Keanu isn’t for everyone, though. Many of the laughs that Key, Peele, and director Peter Atencio (who also helmed most of Key & Peele during its run on Comedy Central) go for are dependent on pop-culture references; the millennials who turned their TV sketches into viral hits will appreciate these jokes, but the humor might not translate to audience members of all ages. To those unfamiliar with the Key & Peele brand, any enjoyment of the movie will have to come from the plot and characters, which are far from Oscar-caliber.

Few of the supporting players get much time to shine. Method Man and Haddish play their parts straight, for the most part, and Forte spends most of the movie bemoaning his constantly grim situation. Fellow improviser Rob Huebel only gets only one scene to show off his knack for playing smarmy-jerk characters. Keanu would have been benefited from co-writers Peele and Alex Rubens fleshing out a subplot involving Huebel and Nia Long -- Long plays Clarence’s wife, but she isn’t afforded the opportunity to be anything more than a slightly grumpy stock character until it’s far too late.

Key and Peele are forced to carry a number of scenes with just their line readings and irrepressible energy, and it’s amazing how often the duo are able to pull it off. After performing together for so many years, their comedic repartee is truly something to behold. Although Keanu doesn’t reinvent the wheel, it does have the slick look of a first-rate action flick (courtesy of cinematographer Jas Shelton) despite feeling more like a drawn-out improv skit. There isn’t a whole lot here for moviegoers who didn’t like (or watch) their sketch-comedy series, but fans of Key and Peele’s previous work will likely leave satisfied.