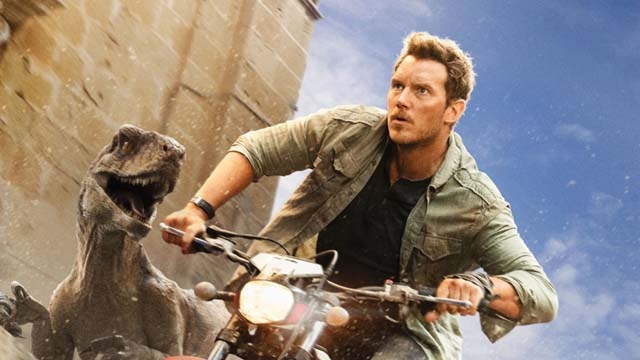 Colin Trevorrow (The Book of Henry), writing with Emily Carmichael (Pacific Rim: Uprising) and Derek Connolly (Kong: Skull Island), returns to the Jurassic World director's chair with Jurassic World: Dominion. This final film in the arc unites both iconic casts for the first time in a thrill ride of a movie that is big on action but misses a few strands of DNA in the story’s evolution.

The planet is learning to live with dinosaurs being everywhere. As with anything exotic, this includes the black market dealing in them. The biggest prizes in this illegal trade are Blue's baby raptor and the clone Maisie Lockwood (Isabella Sermon). Both are protected by Owen Grady (Chris Pratt) and Claire Dearing (Bryce Dallas Howard) in a remote woodland cabin. But poachers find them and kidnap both, forcing Owen and Claire to embark on a worldwide search.

Meanwhile, a new, genetically engineered species of locust is ravaging crops and threatening the world's food supply. This draws Ellie Sattler (Laura Dern) and Alan Grant (Sam Neill) back together to try to solve the origin of the crisis. These seemingly unrelated quests converge when both lead to the genetics laboratory Biosyn and the enigmatic visionary Lewis Dodgson (Campbell Scott).

Trevorrow does an excellent job directing the action and the actors from beginning to end. Where he falls short is in the scripting duties via plot holes. The story is adequate and organically brings the two casts together, but missing pieces create some questions with answers that never get found. This isn't overtly troublesome, but it will gnaw at the back of the mind during the final credits. The other issue is the chaos in the story for the first act. There are too many pieces to move around, which happens in a fragmented and sometimes cartoonish way that affects the overall narrative through lack of development – and sometimes forced development solely to give a character an arc. Finally, audiences might expect an overabundance of dinosaurs to be the reason for the shortcomings, but the reality is that for the first half of the film, too much time is spent hurriedly developing the background for the overabundance of characters. Regardless, if audiences go in looking for a fun film without looking too deeply, the movie is fun. There are lots of subtle and overt callbacks to the previous films, and fans of ‘dinos’ will undoubtedly get their fill by the end.

Additionally, the special effects are quite spectacular – using a blend of CGI and puppetry in a way that reminds the audience of this franchise's roots. Because of the advances in technology, the artists can show any dinosaur – and by the end of the film, they really go to town on this. Flying, running, feasting, and even swimming dinosaurs abound, blending seamlessly with the sets, actors, and even modern animals, large and small. Panoramic views of dinosaurs in their habitat abound in stunning low-to-the-ground and long aerial shots, awakening that kid in every audience member that's always wanted to see a live one.

Jurassic World: Dominion has flaws in the story but provides an enjoyable two-plus hours of entertainment. As a stand-alone, audience members might feel like they're missing some bones. But as a final chapter in a decades-long series, it is a decent end of an era.