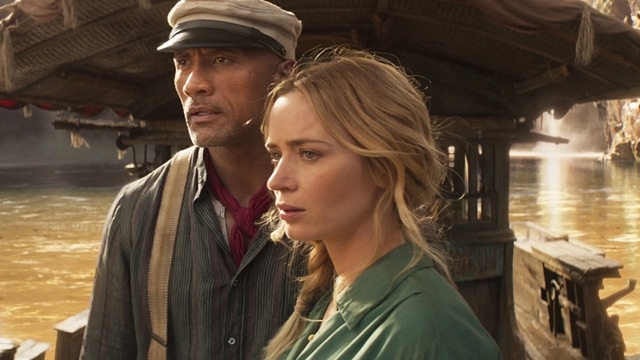 In their continuing determination to turn every one of their attractions into a big-budget film, Disney brings us Jungle Cruise. Fortunately, writers Michael Green (Logan), Glenn Ficarra (Cats & Dogs), and John Requa (Smallfoot) manage to take the short ride and turn it into a solid script that director Jaume Collet-Serra (Orphan) molds into a fun and exciting feature-length film.

Dr. Lily Houghton (Emily Blunt) is determined to crack the legend of the Tears of the Moon – a plant whose petals can cure any illness or curse. To do so, she and her brother MacGregor (Jack Whitehall) travel to the Amazon, where the plant is said to grow. To reach the remote location, Lily must hire a cruiser. Instead of one of the newer ships owned by Nilo (Paul Giamatti), she settles for the rickety boat piloted by Frank Wolff (Dwayne Johnson). But she isn’t the only one determined to find the mysterious plant. Pursued by Prince Joachim (Jesse Plemons), who wants the plant for his own dark plans, Lily, Frank, and MacGregor must race to find it first. Complicating matters is the resurrection of the original conquistador, Aguirre (Edgar Ramirez) by Joachim, who also needs the plant to break the curse placed on him by the Puka Michuna elder 400 years before.

Because it is based on a ride rather than an original story concept, the script could have gone downhill quickly (think Haunted Mansion). Fortunately, Ficarra, Green, and Requa seem to have started with a good idea and worked the cruise theme around it. The result is a solid tale full of adventure, fun, and the jokes you expect to hear when you ride the actual attraction. The pace is fast, which keeps attention on the action. The overall result is like a modern version of the Disney live-action films of the late 60s and early 70s – entertainment that the whole family can enjoy without going too deeply into moralizing.

Collet-Serra clearly let the actors know that the goal was light-hearted entertainment. He seems to know what made the classic live-action Disney films work and gets the actors to go all-in for their portrayals. Johnson doesn’t take himself too seriously, which is when he is at his best. Blunt’s portrayal of Lily makes one think of Mary Poppins with attitude: well, with more attitude. Plemons steals the show in every scene in which his Joachim appears – over-the-top and cartoonish; it’s everything that makes a bad villain so good to watch in Disney.

The special effects are fantastic, although reminiscent of Pirates of the Caribbean. It worked then and still works now, as the characters are different enough to be original. The score drives the action along, matching the scenic cinematography well. The star of the technical department is the scenery, though. There are huge, spot-on reminders of the ride adventurers have come to know and hints of what changes are to come – all on a more spectacular scale than the theme park can offer.

Jungle Cruise is a river ride of fun and action, which is precisely what it should be. Anyone who buys a ticket is sure to find themselves cruising to adventure on a two-hour plus thrill ride.

Pirates of the Caribbean: Dead Men Tell No Tales

Pirates of the Caribbean: Dead Men Tell No Tales