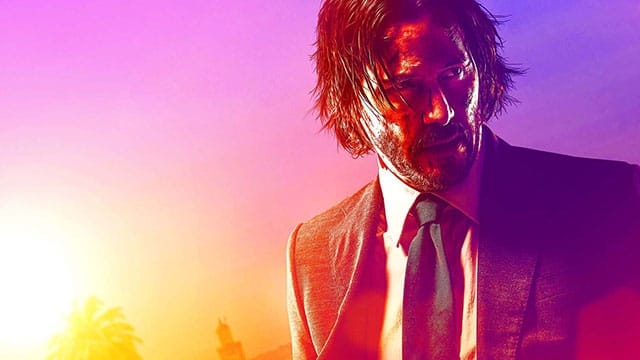 John Wick: Chapter 3 – Parabellum lives up to the expectations set by the two previous films in the series, all while sneaking in a little more mayhem, carnage, and blood as it expands its ultraviolent franchise. It’s so excessive, the movie is almost a parody of itself, and yet the action is so expertly choreographed and filmed, that it still rises to the top of the action movie genre.

Although he never asked for the job in the first place, John Wick (Keanu Reeves) is the greatest assassin in the world. Now, he’s just committed an act that’s criminal amongst criminals: the killing of a crime boss in the Continental Hotel, a haven for assassins. This is good to know because this third installment doesn’t spend any time catching the audience up to speed on what happened in the first two.

Taking place only moments after the second film, John Wick is excommunicated from The High Table, a nefarious and highly organized, global assassins’ guild. Not only that, but there’s a $14 million bounty slapped on his back. The only thing John Wick knows for sure is that there could be danger around every turn and pretty much anyone who gets close to him is a threat to kill him.

John Wick reunites with and seeks help from his longtime friend and fellow dog lover/trainer Sofia (Halle Berry). After fighting their way through a slew of talented killers, John Wick makes his way towards the major fighting boss of this chapter: the blade master Zero (Mark Dacascos). However, there’s apparently a much higher-ranking villain who is pulling all the strings. He is called The Elder (Saïd Taghmaoui), and he is the only person capable of granting forgiveness for John Wick’s crimes.

The pacing of John Wick: Chapter 3 – Parabellum is steady, with the fights growing increasingly difficult and each new set piece unique. Withal, the punishment absorbed by John Wick elevates this supposedly human character to more of a superhero status (especially considering the action in this movie starting moments after John Wick: Chapter 2). He feels pain in the moment, but that doesn’t stop him from being in top physical condition during his next conflict.

As director and veteran stuntman, Chad Stahelski continues his John Wick legacy, bringing enough rock-solid fight scenes to contend with the very best brawler movies. His energetic style of incorporating the best elements from similar movies and creative enhancing of ideas contribute to this unique blend of proven and fresh material.

Like any good movie with Keanu Reeves, the dialogue here is sparse, and the action intense. Unfortunately, great movies also require more plot and emotional investment into its characters. While John Wick: Chapter 3 – Parabellum brings us deeper into the franchise with more violence, more bad guys, more worldbuilding, and more bodily harm to our hero, it struggles to rejuvenate John Wick’s soul.