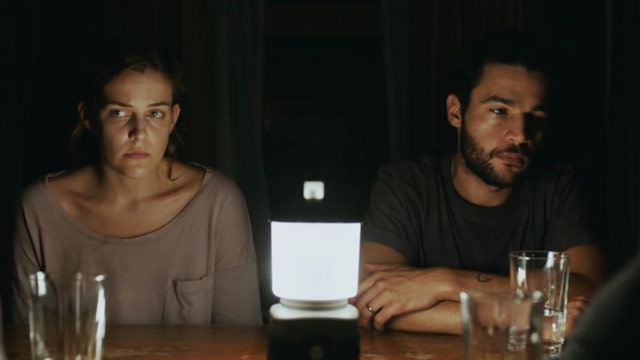 It’s a worst-case scenario: The world as we know it has been lost to an apocalyptic pandemic, and a family struggles to survive after society has crumbled. This is how Trey Edward Shults sets the scene in his sophomore directorial endeavor, the quietly disturbing—but frequently slow-placed—It Comes at Night. The gut-wrenching opening finds patriarch Paul (Joel Edgerton) making the heartbreaking choice to put his sick father-in-law out of his misery with the help of his teenage son Travis (Kelvin Harrison Jr.), and the scene shows us the effects of the mysterious disease in horrendous detail.

Isolated deep in the woods, far away from what dregs of civilization remain, Paul has established a tenuous domestic routine with his wife Sarah (Carmen Ejogo) and Travis. Paul explains that clinging to this semblance of normalcy is what will preserve their sanity, but their fragile sense of peace is shattered when Will (Christopher Abbott) comes upon their home, seeking water for his wife (Riley Keough) and child. Although initially highly suspicious and reserved, Paul eventually allows Will, his wife, and their toddler son to come live with his family, so long as they respect and maintain their daily routine. Things seem to go well at first, but fear and paranoia gradually push Paul toward a series of devastating choices, which finally lead to a bleak and tragic climax.

Shults’ mastery of minimalist plotting helps ramp up the film’s tension—by giving us only skeletal backstories and no specific details about this postapocalyptic world, he allows the audience’s paranoia and raw fear to build to a heart-pounding peak alongside the characters onscreen. The use of natural lighting, claustrophobic (and, at times, voyeuristic) camerawork, and a brilliantly eerie score from composer Brian McOmber add to the anxiety. And while all of the actors are top-notch, Harrison’s portrayal of Travis, a boy on the brink of adulthood who’s been cloistered away from all of humanity but his family, is particularly striking; it’s uncomfortably fascinating to watch him grapple with night terrors, social skills, and his awkward and confusing sexual desires.

The problem is that the film’s tension comes entirely from its slow-building, stomach-knotting malaise, which means that there are long stretches that seem to drag. And while the lack of information regarding the characters and their dire circumstances allows viewers’ imaginations to run wild, certain horror elements are compromised by that ambiguity, lending the film a more melancholy, empty feeling rather than a terrifying one. There are some choice jump scares and practical effects, but not nearly enough to balance out the sleepy, soul-crushing gloom.

It Comes at Night’s grim allegory skillfully evokes our greatest fears about where our society might be headed, much in the same vein as other recent successes in psychological horror like Lights Out, Don’t Breathe, and Get Out. It’s an interesting watch, but not for those seeking fun escapism.