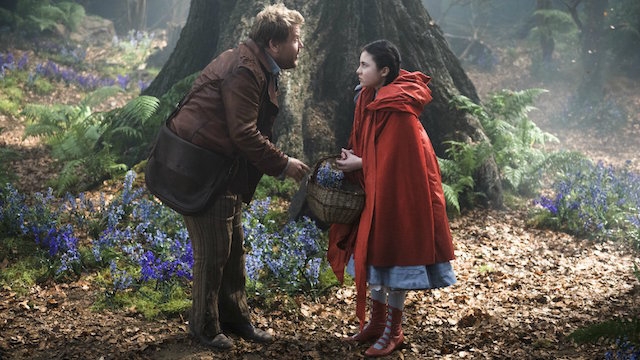 Into the Woods is arguably the most beloved of Stephen Sondheim's musicals because the typically excellent compositions serve a story that's all about the importance of telling stories. Rob Marshall's big-screen adaptation is a highly entertaining movie that manages to be a total crowd-pleaser without shying away from the plot’s darker elements.

This mash-up of famous fairy tales features Cinderella (Anna Kendrick), Little Red Riding Hood (Lilla Crawford), and Jack (Daniel Huttlestone) of the beanstalk fame. The three of them cross paths with a baker (James Corden) and his wife (Emily Blunt), who are unable to have children due to a curse an evil witch (Meryl Streep) placed on the baker's family. In order to lift the curse, the couple must retrieve three precious items, one from each of the famous characters, and present them to the witch.

As is to be expected from Sondheim, the songs in Into the Woods are fantastic. Characters trade lines back and forth with conversational ease, allowing the often witty rhymes to be entertaining while also serving the story. Just as crucially, the actors rise to the challenge of these exquisite compositions. Anna Kendrick, who proved her vocal bona fides in Pitch Perfect, glows as Cinderella. She has a first-rate singing voice, coupled with excellent comic timing. Streep continues to prove that she can do anything superbly, and Emily Blunt carries much of the weight of the movie. The entire cast are absolutely charming, though that adjective should probably be saved for Chris Pine, who is deliriously, perfectly hammy as Cinderella's Prince, a character as handsome as he is shallow.

Director Rob Marshall, who helped drag the movie musical into the 21st century with Chicago, smartly chose to shoot Into the Woods with a purposefully artificial look—he understands that making these fantastical tales seem "real" would distract from their primal appeal. It's the audience's connection to these overly familiar narratives that lies at the heart of the film’s theme: the necessity of telling stories, of passing folktales down through the ages.

This material is shot through with darkness. It isn’t shy about confronting death, and Sondheim's lyrics slyly allude to the sexual metaphors in Little Red Riding Hood. However, while all of this is present in the movie, Marshall never allows it to overtake the rest of the story. This is rated PG for a reason, yet at the same time, Sondheim and play co-author James Lapine's vision hasn't been Disneyfied. It's entertainment for the entire family, not because adults will tolerate it, but because the sharply written material works on various levels. Into the Woods is a grandly satisfying experience—one rooted in old-fashioned storytelling, peerless songcraft, and a genuine respect for the viewer’s intelligence.