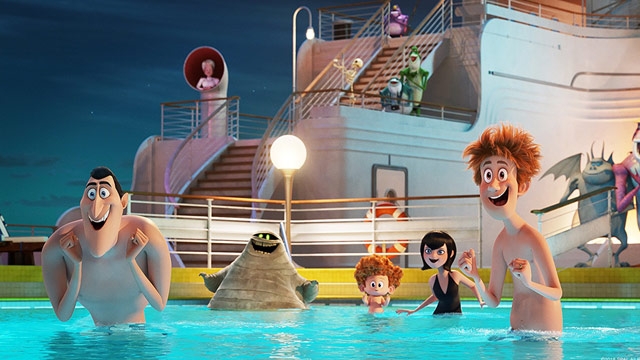 The Hotel Transylvania franchise returns again, adding Jim Gaffigan, Kathryn Hahn, Joe Jonas, and Chrissy Teigen to its already star-studded cast. A familiar face in Genndy Tartakovsky, director of the first two Hotel Transylvania films, returns for No. 3, but also has a newcomer flanking him in Michael McCullers (from the Austin Powers series), who joins Tartakovsky in the scriptwriting. This seems like an ideal combo, but we are unfortunately presented with an effort that, while worth seeing, is not all that memorable or original.

Dracula (Adam Sandler) is lonely, but instead of simply admitting his feelings, he tells his daughter Mavis (Selena Gomez) that he misses time with the family. In order to correct this, she has her husband Johnny (Andy Samberg) plan a vacation cruise for her father, and all the other monsters join in. After they arrive, though, a plot by Dracula’s old archenemy Van Helsing (Gaffigan), in conjunction with his great-granddaughter Ericka (Hahn), threatens to bring an end to all monsters forever.

While not bad, the script is a little predictable, relying on some of the same jokes and adding only a few new ones that just don’t work as well as those of the previous installments. At times, it seems almost forced in an effort to seek new humor to apply to recurring characters. Like the previous two films, we are shown that appearances can be deceiving, prejudgments are bad, and common ground can be found for most of us. This is an admirable thing to teach, and an important one for child viewers, but it is common almost to the point of being overdone, especially when it happens three times in the same franchise.

All the old favorites are back – Steve Buscemi, Fran Drescher, Kevin James, Keegan-Michael Key, Molly Shannon, and David Spade all return. But, very little use is made of them. The focus on the main characters is so great that even Samberg’s portrayal of Johnny becomes two-dimensional, and Gomez’ role as Mavis, typically a strong female role model, is also overshadowed. Of the new players, only Joe Jonas’ depiction of The Kraken stands out, but more so for the novelty of a crooning sea monster as opposed to the performance itself.

Fortunately, there are technical aspects that help lift this film from a bland outing to a viewable experience. The animation is virtually flawless, from the foreground characters to the small details in the background. There is one scene where things get a little frenzied and hard to follow, but it is a very brief and busy moment. Both the sound mixing and the music set the atmosphere well and (fortunately) keep the film moving along at a nice pace.

In the end, though, it seems like what should be a great series becomes weaker with each film. And while child viewers are likely to still enjoy virtually every aspect of the movie, adult viewers will find fewer laughs and enjoyment than the previous entries.