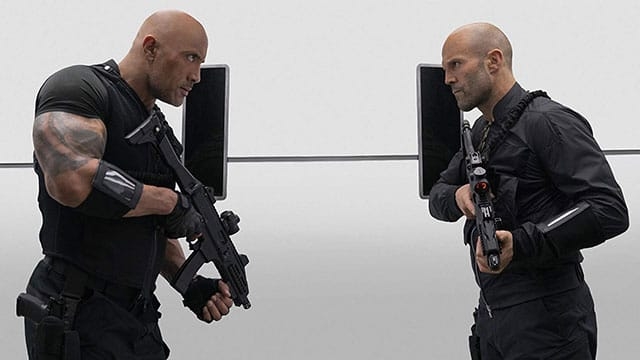 As a new addition to the Fast & Furious franchise, David Leitch directs Hobbs & Shaw, with its over-the-top and well-choreographed, CGI action sequences, delivers a comparable, if not larger adrenaline rush than its predecessors. However, it falls short in terms of its plot, depth, and substance, leaving the audience with a typical, smash ‘em-up Hollywood flick.

American DSS agent Luke Hobbs (Dwayne ‘The Rock’ Johnson) and Deckard Shaw (Jason Statham), a British ‘good guy’ mercenary, are reluctantly thrown together (again) to take on a totalitarian-thinking organization’s plot to unleash a bio-harnessed virus into the world, leaving only the fittest to survive. Shaw’s sister, Hattie (Vanessa Kirby), also a highly skilled mercenary, becomes infected with the virus, which must be extracted from her body in order to save her life. The dynamic, mutually sarcastic, comedic duo of Hobbs and Shaw must break into an almost impenetrable facility, run by the totalitarian organization located in Moscow, in order to retrieve a device that can extract the virus from Hattie’s body. Their prime nemesis, Brixton (Idris Elba), a former ally of Shaw and now an elite killer for the ill-intentioned organization, has since had ‘mechanical’ upgrades to his body, giving him super-human abilities. He must counter their efforts and take control of the virus inhabited by Hattie in order to carry out the organization’s master plan of using the virus as a bioweapon. As the conflict between both rivals ensues, an all-out pandemonium results in a multi-continental battle as both sides race to accomplish their goal.

Despite well-timed banter between Hobbs and Shaw with their relentless alpha-male verbal attacks, the script and dialogue miss the mark in terms of making an impact. There are decent elements to the back-stories of the characters, but it doesn’t capture its potential depth; the script was too fluffy and the dialogue too trite. However, it’s the charisma and on-screen chemistry that allow for Hobbs & Shaw to rise above what is otherwise an average Hollywood action film. The family dynamic between Hattie and Deckard is strong but unrealized chemistry between Hattie and Hobbs disappoints. Still, a few surprise cameos help to bring a bit more of a ‘punch’ to the film.

Cinematically speaking, the action-packed visuals are on par with any big budget Hollywood film.  Although the acting, for an action film, is good and helps thrust the film forward, the almost-predictable, verbal jabs between the main characters leaves a watered-down version of what could have alternatively been a more meaningful story and screenplay.  In other words, although funny at times, less would have been more. From an entertainment standpoint, the direction holds up in terms of its visual storytelling and incorporation of cutting-edge CGI, but it lacks in the multi-dimensional sense of how vital emotion can be in action-packed scenes.  Indeed, there are stunning shots and sequences, but depth is lacking.

Except for young children, almost any age group, if in the mood for non-stop sarcasm and hard-hitting Hollywood action, will enjoy the two-hour Hobbs & Shaw film ride.  What the audience will not get, is a multi-layered and artistically driven film in terms of storytelling.  The first take-away message from the film is that irrespective of how far we take technology, the ‘will’ of the human spirit will always supersede the inorganic.  And secondly, there is always room for forgiveness and unconditional love with family – no matter how much time passes.

The Fate of the Furious

The Fate of the Furious