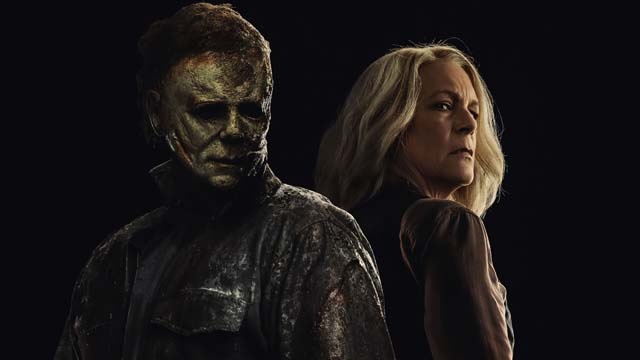 Directed by David Gordon Green, Halloween Ends is the final film in the H40 timeline and the last Halloween film to be produced under Blumhouse. In the film, iconic scream queen Jamie Lee Curtis is joined by Andi Matichak, Rohan Campbell, James Jude Courtney, Kyle Richards, Will Patton, and Nick Castle. While Halloween Ends might not be the end of the franchise, it is the last movie in which Curtis will play Laurie Strode and Castle will play Michael Myers. Talk about pressure.

Halloween Ends takes place four years after the events of the previous film (Halloween Kills). Laurie Strode is rooming with her granddaughter, Allyson (Matichak) as she finishes writing her memoir. They are trying to move on with their lives despite the horrible people around them who insist on blaming Laurie for the antics of Myers, who has since disappeared.

Allyson finds a kindred spirit in Corey (Campbell), who was accused of intentionally killing a child he was supposed to be watching. Babysitters in Haddonfield just can’t seem to catch a break, can they? With Halloween Day coming back around, will the past repeat itself? Is Michael Myers really dead? Will the roving ensemble of band-geeks-turned-bullies get their comeuppance?

The performances in the movie are well done, as are the special effects. The writing is hit or miss, however, with the highlights being the creative killing methods, the adorably awkward flirtation sequence with Laurie and Frank, the compelling opening hook, and the various representations of evil and how it has manifested through Haddonfield. Using Laurie’s memoir as a narrative framing tool, the theme of malevolence is explored throughout.

Unfortunately, certain aspects aren’t fully fleshed out and feel rushed. Specifically, Allyson and Corey’s connection, Corey’s evolution, and Myer’s reintroduction into the film. As a finale to this Halloween timeline and the last movie in which Curtis will appear as Laurie Strode, a lot of emphasis is placed on creating an ending which will feel satisfying. The culmination, while visceral and as bloody as a slasher film should be, feels rather anticlimactic. But then again, how does one kill a force like Michael Myers? How should this epic cinematic story come to an end?

Halloween Ends plays out like a typical slasher film. While it might not be the scariest, the kills are creative, viewers will love rooting for Laurie, and the special effects are well done. However, the story is shaky and some of the potential is lost as the film feels somewhat rushed and convoluted. The fault may lie in their misguided (albeit earnest) efforts in trying to tie a nice, neat bow to conclude this storyline.