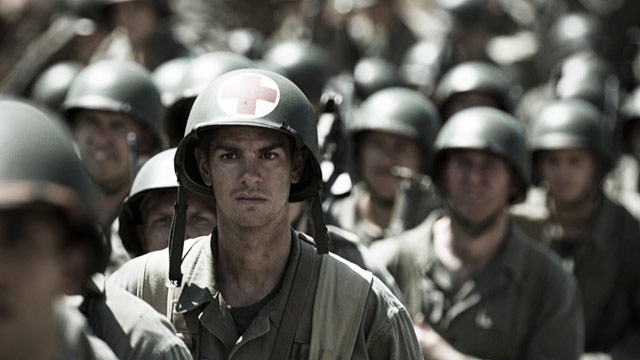 After a decade away from the director’s chair, Mel Gibson makes his return with the unfortunately uneven war biopic Hacksaw Ridge. His subject is Medal of Honor recipient and pacifist war hero Desmond Doss (winningly played by Andrew Garfield), a Seventh-day Adventist who joins the U.S. Army as a medic despite his aversion to violence and refusal to touch a weapon.

The genesis of Doss’ steadfast beliefs comes early in life. As a child, Doss and his brother are scrapping in the front yard as their boozed-up father (Hugo Weaving), a damaged WWI vet, watches on. When his brother gains the upper hand, Doss reaches for a brick and delivers a devastating blow to his head, knocking him unconscious. As his parents care for his injured brother, he stands in front of a Ten Commandments tapestry in their house, focusing intently on the Sixth as tears stream down his face.

Fast-forward into young adulthood, and Doss has become a magnanimous and charming country boy. He meets cute with Dorothy (Teresa Palmer), a nurse at the local hospital, and the two begin a traditionally dull romance. As the war overseas intensifies, Doss dreams of learning medicine to help serve his country. Dorothy helps him study, and despite the wishes of his parents, he enlists. As basic training begins, Hacksaw Ridge goes full on into the tired clichés of war movies past. Doss’ unit is a “one of every kind” squad of stock types, replete with painful introductory scenes that present each of their sole distinguishing characteristics. They’re quickly joined by the screaming, no-BS drill sergeant (a distracting Vince Vaughn) and a jaded Army captain (Sam Worthington).

The further that Doss gets into basic training, the more his beliefs are persecuted by his superiors and fellow soldiers. He is so unwavering in his refusal to touch a rifle that his unit turns distrustful and, eventually, physically threatening. It all leads up to the anticipated courtroom drama, where Doss’ pleas for decency and respect for his faith (plus a well-timed letter delivered by his father, in which a WWI general advocates for his cause) grant him the right to serve as a medic in the Pacific theater without bearing arms to protect himself. This brings us to the shores of Okinawa, where Doss and his unit are tasked with scaling a cliff and mounting an offensive against the Japanese in the unrelenting, viscerally thrilling final hour of the film.

It's understood that most war movies rely on a series of accepted banalities, but the first half of Hacksaw Ridge seems almost entirely composed of them. The rote storytelling (the script was written by Andrew Knight and Robert Schenkkan) isn’t necessarily poor, just bland and plodding. Once the particulars are settled, the film is finally able to take off. The second half of Hacksaw Ridge comes bearing plenty of spilled viscera, with Gibson’s fetishizing of violence once again on full display in a stunning collection of brutal, expertly choreographed, and earsplitting combat scenes. Soldiers use corpses as human shields, grenades burst innards in every direction, and foot-long rats gnaw on the deceased. But ultimately, what does Gibson really accomplish by taking every opportunity to exaggerate the act of killing after vilifying bloodshed through his character study of Doss? The spectacular viciousness of the battle scenes feels directly at odds with the movie’s proselytizing preamble.

It would seem that Gibson’s candid depiction of war’s brutality is meant to juxtapose Doss’ conviction against the horrors of the world. In a sense, viewers are given no choice but to revere him and his deeply held faith when the enemy is as ruthless as the Japanese are presented as here. There are no shades of grey in Hacksaw Ridge, as Doss is beyond reproach and his mates will eventually realize this and venerate him. This is not to denigrate the incredible real-life heroism of Doss, but is simply a criticism of the aim of the film’s director. It’s a disservice to the complexities of war and the unconscionable moral trials that generations of soldiers have endured.

The themes and imagery of Hacksaw Ridge have all the subtlety of the brick that Doss swings into his brother’s head: Gibson frequently frames Doss in Christ-like visuals, while heaps of dialogue feel like soundbites for a neatly packaged trailer. It’s been ten years since Mel Gibson helmed a feature, and he has clearly lost some of his grip on storytelling in that time. The director’s masterstroke came in 2006 with Apocalypto -- a perfect marriage of devastating violence and entertainment -- and despite the shortcomings of Hacksaw Ridge, his return to the cinema remains a welcome sight. But half of an effective film is still just half of an effective film, and while his portrayal of Doss’ heroism on the battlefield is moving and honorable, neither the tedious setup nor the ham-fisted delivery should get a free pass.