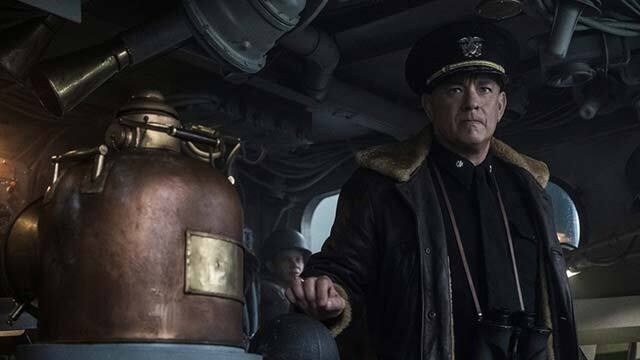 Greyhound is a World War II military thriller based on real events, set at sea. A naval destroyer is tasked with escorting a convoy of supply ships across the Atlantic, through a dangerous stretch of territory that can’t be protected by air cover.

Captain Ernest Krause (Tom Hanks) is a US Navy officer in charge of the USS Keeling, a Fletcher-class destroyer, which is also code-named Greyhound. He’s tasked with protecting a convoy of 37 ships carrying troops and supplies over to Europe and join the war efforts during the Second World War.

Unfortunately, to get to Liverpool they must travel through a very long stretch of the Atlantic Ocean referred to as the “Black Pit,” since it’s too far from land for airplanes to be able to cover the ships. Greatly adding to the danger are the German U-boats, or underwater boats (submarines), which are able to fire torpedoes designed to sink the supply ships Captain Krause is delegated to protect.

Bent on breaking the supply chain coming from the US, a team of German subs mingles with these boats, threatening Captain Krause’s ship, as well as the convoy that are dead in the water unless Krause can stop this hidden threat.
Torpedoes abound as both nations battle to achieve their opposing missions. If the Germans can’t stop this threat, the troops and supplies will be used to crush them in the war. Meanwhile, Krause’s snap life-or-death decisions will either carry him and his troops to victory, or a watery grave.

Directed by cinematographer turned director Aaron Schneider (Get Low), Greyhound thrives in small spaces. In and of itself, the Atlantic Ocean is not a very visually interesting set piece, since the ships are surrounded by water at all times. However, Schneider manages to create tension with the constant unseen threat from below, the explosions and mayhem ensuing from their skirmishes, and the constant military chatter abounding in trying to locate and destroy the enemy.

Greyhound is the first feature film written by Hanks that he didn’t also direct, and while it shows off his ability to write slick action scenes, what it doesn’t showcase is what he’s most known for, which is his ability to outstandingly play a relatable character stuck in a hard situation. While his acting ability is not in question, it’s the depth of the hero he plays that seems to be missing from this equation, which is equally strange since the film runs short and there’s ample opportunity to add in reactions from himself or his crew.

The Captain Krause character is taken primarily from The Good Shepherd, a novel based on true events and written by C.S. Forester, which follows Krause through his involvement in the Battle of the Atlantic US military campaign that lasted from 1939 to 1945. While the hero may be made up, the events are not. Many passages like this were made during World War II, and some boats made it through, while others were sunk by German submarines.

Ultimately, Greyhound delivers a minimalistic view of one very small aspect of World War II, which fits neatly into a library of films created since the event. Its brisk pacing and slick cuts provide a burst of action, rather than an in-depth character study, which makes for an entertaining watch, albeit a little shallow for an epic ocean war story.