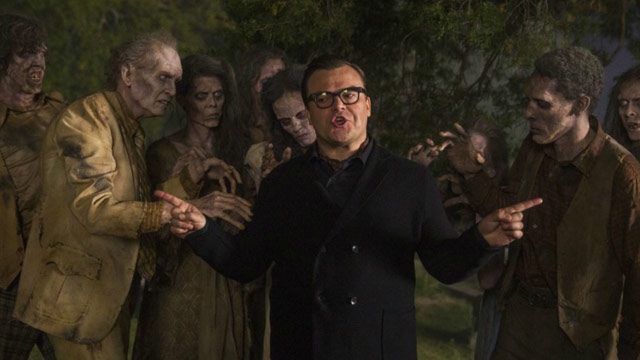 Perhaps the most surprising aspect of Goosebumps, the wonderfully spooky and highly entertaining movie based on author R.L. Stine’s popular kids’-lit series, is that it’s the first film adaptation of one of his books. Stine’s silly, chilling tales, which boast such titles as “It Came From Beneath the Sink” and “Say Cheese and Die,” have sold more than 400 million copies worldwide, making them one of the best-selling book franchises of all time. Tim Burton tried to tackle the anthology during the height of the Goosebumps craze in the 1990s, but he never landed on a satisfying script. Part of the problem in cracking open the series was deciding which one of the 62 books in the original series to adapt, since each terror-filled tale stood alone and the franchise didn’t revolve around a central character. The ingenious idea that makes this Goosebumps adaptation work is that it turns Stine himself into a character in the story, and uses his presence as a plot device to bring several of his creepy creations to life, rather than settling on just one.

Goosebumps begins with teen hunk Zach Cooper (Dylan Minnette) and his newly widowed mom (Amy Ryan) moving from New York to a small town in Delaware, where they hope a change of scenery will help them get past their grief and begin to heal. Zach isn’t too keen on the move at first, but that quickly changes when he meets Hannah (Odeya Rush), his friendly, cute next-door neighbor. Unfortunately, Hannah’s brusque father, author R.L. Stine (Jack Black), makes it very clear that Zach isn’t welcome on his property and that he is to stay far, far away from his daughter. But when Zach overhears what he believes is a violent argument between Hannah and her dad, he fears for her life and breaks into her house with his nerdy new friend Champ (Ryan Lee) to rescue her. When the two discover some locked books, which turn out to be Stine’s complete Goosebumps catalogue, they innocently unlock one titled “The Abominable Snowman of Pasadena”; to their horror, the monster leaps off the page and materializes in the room, then crashes through a wall and takes off. In the midst of this mayhem, another book called “Night of the Living Dummy” also gets unlocked, which frees Slappy, a villainous ventriloquist dummy. Slappy (creepily voiced by Black) then goes about unlocking all of the Goosebumps books, thus freeing every Stine monster — including a vampire poodle, a group of knife-wielding garden gnomes, a giant praying mantis, and a hunger-crazed werewolf — from their imprisoned pages to terrorize the town.

Playfully swinging between delightful dark humor and light-PG horror, Goosebumps is unlikely to produce goosebumps in any but the youngest of viewers, although Slappy is genuinely menacing and might unnerve even some adults at times. But the rest of the monsters are, in general, as cartoonish as they are scary, and the mayhem they create never really harms anyone. And although a great third-act twist heightens the drama considerably and increases the potential peril for our heroes, we never really fear for their lives.

The movie is ably supported by a great cast. Black’s snobbish take on Stine is both hilarious and heartfelt, while Minnette and Rush are equally appealing. But Lee and Jillian Bell, the latter playing Zach’s loony aunt, are the standouts. The scene-stealers’ goofy charm and endearing traits make their characters, both lonely outcasts, winsome and relatable. Director Rob Letterman (Gulliver’s Travels) and screenwriter Darren Lemke also deserve kudos for deftly mixing chaos and comedy to produce a crowd-pleasing adventure that is equal parts frightening and funny.

When Slappy is freed from his leather-bound purgatory early in the film and plots Stine’s downfall, he refers to it as “Slappy’s revenge,” which Stine instantly recognizes as a great title for a book. It would be a great title for a movie, too. Here’s hoping Slappy and his monstrous friends are allowed to come out again and scare up more spooky fun in the near future.