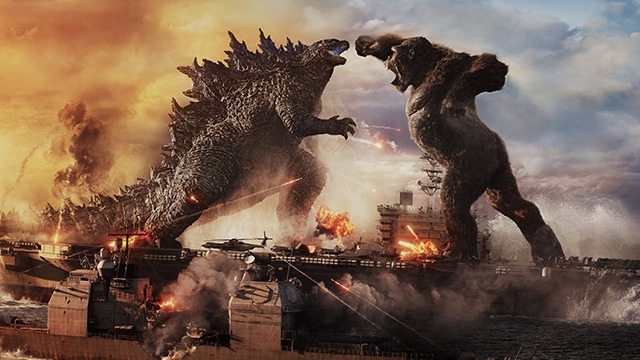 Godzilla vs. Kong, the latest entry in Warner Brothers’ “MonsterVerse”, knows exactly what it is, and more importantly, knows exactly what the audience is looking for. As a film overall, Godzilla vs. Kongg falls a step below greatness, but the love given to its two iconic characters makes it worth a watch. As director, Adam Wingard does an unbelievable job orchestrating some of the feature’s biggest moments, creating suspenseful, titanic clashes without taking itself too seriously. Much of the writing here is forgettable, and the story is simplistic and bland, but when you see two of cinema’s most well-known colossal monsters face off for the first time, none of that other stuff really matters.

Starting right after the events of Godzilla: King of the Monsters, we are thrust into the new world order. Titans rule everything around them, keeping humans in check all while replenishing the depleted ecosystems across the planet. After an unexpected Godzilla attack in Florida, APEX Industries enlists the help of scientists Nathan Lind (Alexander Skarsgård) and Ilene Andrews (Rebecca Hall), to lure Kong to his original, underground home; this is done also with assistance from the young and impressive Jia (Kaylee Hottle). Meanwhile, on the other side of the planet, conspiracy podcaster and APEX employee, Bernie Hayes (Brian Tyree Henry), teams up with Madison (Millie Bobby Brown) and Josh (Julian Dennison) to investigate weird happenings within APEX.

After a slow start, Godzilla vs. Kong picks up in a big way, and never really slows down until the credits hit. Once the monsters get reacquainted, all of the story beats and cinematic fundamentals almost get thrown out of the window. This film is about action, and it does action very well. It is very clear that Wingard (V/H/S, Blair Witch) knows who his stars are, and he smartly revolves the movie around them. The acting and storytelling are not bad, but they are just good enough; a passable attempt to push the overarching narrative along. Viewers will probably roll their eyes at the majority of the plot; nothing ever shines besides the film’s looming battle. There are a few characters that stand out, like the aforementioned Jia and the “conspiracy trio,” but in the end the real stars are the titular characters.

Godzilla vs. Kong impresses with massive, city-destroying battles between the legendary duo. For the most part, the animation is flawless. Rampaging through the streets of Hong Kong never looked better, and if nothing else, the animation and editing departments of this film deserve some praise. The character models are impressive and really breathe life into the characters. Kong is menacing but also welcoming, from a 1,000-foot view at least, and Godzilla is terrifying as he transitions from water to land, showing off his nuclear prowess. Fans of the action genre will absolutely be treated to what they came for, and the impressive direction may land a few skeptics as well. Godzilla vs. Kong is a blockbuster movie done right, and hopefully a good omen for the future of WB’s MonsterVerse.