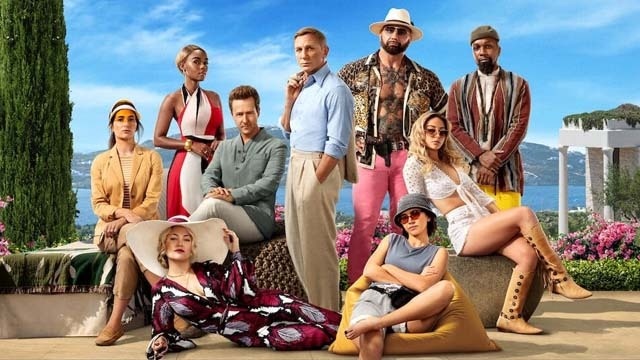 Glass Onion: A Knives Out Mystery

Rian Johnson is back with Glass Onion: A Knives Out Mystery, a follow up to 2019 smash hit whodunnit Knives Out. Glass Onion is a colorful sequel that doubles down on the laughs, twists and turns put forth by its predecessor and provides an even more flamboyant cast of characters who are just as insufferable and vapid. Johnson provides a take on the ultra-rich and ultra-powerful that is poignant albeit heavy-handed.

In this second installment, set in the backdrop of the 2020 coronavirus pandemic, Benoit Blanc (Daniel Craig) is mysteriously invited to a Greek Island getaway hosted by billionaire Miles Bron (Ed Norton). Bron also invites his former cronies with whom he used to hang out in the Glass Onion, a bar in New York City. This list includes Miles’s former business partner Andi Brand (Janelle Monae), Connecticut Governor Claire Debella (Kathryn Hahn), Miles’s lead scientist Lionel Toussaint (Leslie Odom, Jr.), former model and entrepreneur Birdie Jay (Kate Hudson), Birdie’s assistant Peg (Jessica Henwick), and internet influencer Duke Cody (Dave Bautista). From the very beginning, something is afoot when everyone is questioning why Andi showed up. She and Miles had a falling out when he decided to move forward on a dangerous new form of energy that was not yet ready to go into production, due to its volatility. Miles’s invitation looked to be an intentional one as he has set up their weekend away to be a murder mystery dinner party and that’s when things take a turn, and the expertise of Benoit Blanc is called to order.

Glass Onion is much more colorful and extravagant with characters who are all beholden Miles Bron in one aspect or another. The transition from the familial power structure to the business and friendship power structure may see like a big leap, but Johnson writes it in a way where the characters portrayed stuck and must stroke to Miles’s ego in order to keep their current positions and influence. And while they seem over the top, they are relatable, and everyone knows most of these people in some capacity in their life. Also, in a time where Agatha Christie’s novels have been put to film time and time again, Glass Onion and its predecessor are a breath of fresh air that are set more recently and have today’s comedic sensibilities.

Deserving special mention for his performance is Daniel Craig. Craig’s Benoit Blanc is the lifeblood of this film series and his personality and southern charm shine through in every interaction he has. The way he can play the characters who are rude and vapid and then look out for the characters who need to be cared for and may have been taken advantage of is unbelievable. The subtleties in his performance are what make Benoit Blanc on the cusp of being one of the most recognizable movie characters of the modern era, which is even more kudos to Craig considering his recent and lengthy time portraying James Bond.

Glass Onion: A Knives Out Mystery delivers in ways the original did and capitalized in ways it did not. It is an absolute romp that provides the laughter and joy. Additionally, it’s fun to go back and try to pick out things missed the first time and pull back the curtain and figure out the new mystery.