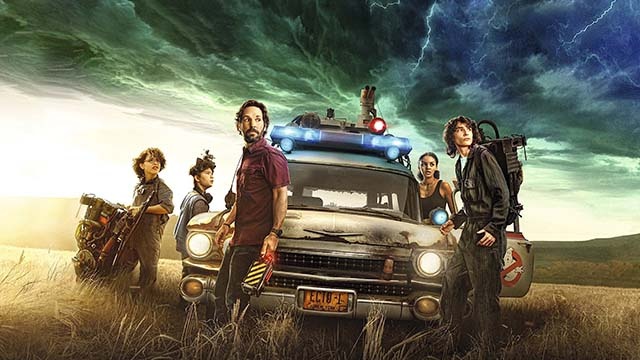 
After decades of waiting, fans of the Ghostbusters franchise have finally gotten a sequel in director Jason Reitman's Ghostbusters: Afterlife. Even though the focus is on a new set of 'busters, fans of the original films still get enough nostalgia through characters and events to make this feel like a genuine continuation of the story.

Just as Callie (Carrie Coon) finds out her father Egon has been found dead in his remote farmhouse in Oklahoma, she and her children Trevor (Finn Wolfhard) and Phoebe (Mckenna Grace) get evicted. With no other choice and the necessity of settling her father's estate anyway, Callie moves her family into the neglected home. Before long, strange things start happening, and the analytical Phoebe must accept that the paranormal is real. Unfortunately, she must also accept that her grandfather had a higher purpose in abandoning his family. Now that he has passed on, the mantle falls to her. With the help of Trevor and her new friend Podcast (Logan Kim), Phoebe must solve the mystery of what Egon was trying to accomplish and complete the work that consumed the last decade of his life.

Ghostbusters: Afterlife isn't as light-hearted as the original films, although it does have its moments. It makes up for this in sentimentality. There are many obvious and subtle callbacks to the first film, some of which are very touching. Even though Harold Ramis is deceased, his presence exists throughout, primarily in the form of Phoebe. Grace's portrayal of a miniature Egon is praiseworthy. However, she is sometimes overshadowed by Logan Kim's performance as a junior conspiracy theorist. It is clear that the four children (adding Celeste O'Connor's Lucky) are avatars for the original four ghost hunters. Yet, each character remains fresh, thanks to good performances and writing that make them individuals. The only unfortunate thing is that they are underdeveloped despite the film's length.

Like the original film, the special effects are state of the art. The crew knew what to change and what to keep precisely the same to preserve the connection to the source. As a result, the equipment - and the creatures - are very familiar. That is as it should be. The music isn't tied as indelibly to the action as in the original, but what is there fits, blending well with the story.

Ghostbusters: Afterlife isn't perfect, but it doesn't fall short, either. It is solid, entertaining, and a decent introduction to new characters that viewers may see again (make sure to stay through the full credits). Best of all, it demonstrates that even something that seems to have left this world can have new life.