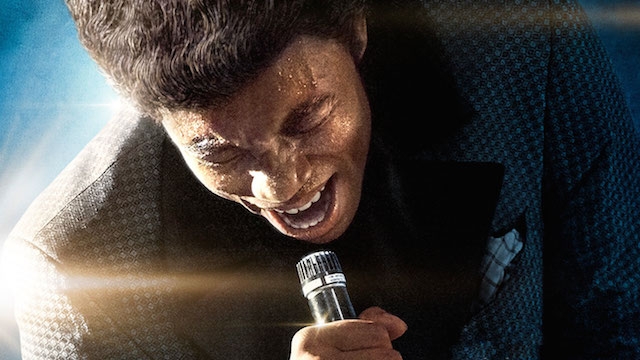 Get On Up—The AllMovie Review

Cradle-to-grave biopics, especially those for musicians, are often catnip for Oscar voters. Ray and Walk the Line earned trophies for their leading actor and actress, respectively, and if nothing else, Tate Taylor’s James Brown biopic Get On Up will get Chadwick Boseman in the conversation for various nominations. Sadly, like those other examples, the acting here is better than the movie.

Forgoing a straightforward chronological approach, Taylor and screenwriters Jez and John-Henry Butterworth skip around in time. They start the film in 1988 with one of the very best scenes, in which an addled Brown has a violent outburst at a business he owns. Then they leap to a 1968 performance for the troops in Vietnam, and follow that with a sequence set in 1939 that shows us his difficult boyhood. We watch as Brown discovers a talent for music, fronts a band that gets him signed, and goes against conventional business practices in order to take control of his interests, all the while evolving his sound and never stopping the funk.

Chadwick Boseman is spot-on as Brown. He perfects the moves of the “hardest working man in show business” as masterfully as he evoked Jackie Robinson’s unorthodox base-stealing dance in 2013’s 42. He’s not afraid of playing Brown at his most unsympathetic, but the movie lets him down throughout by painting a much rosier portrait of Soul Brother Number One than probably existed; the message of the film seems to be, “sure he slapped his ladies around, but what a musical visionary!”

Because everybody plays second fiddle to Boseman’s appropriately larger-than-life performance, most of the supporting cast get swallowed up. The exception is Nelsan Ellis as Brown’s longtime musical partner Bobby Byrd. Ellis, a vocal dead-ringer for Ving Rhames, brings a natural dignity and authority to the part; we feel a strong affinity for him, and we end up liking Brown partly because Byrd is so loyal to him even at his worst moments. By the time the movie gets around to their falling-out, the whole thing has sunk under the weight of its sprawling narrative.

Tate Taylor peppers the picture with good moments, especially in the first hour, but he also resorts to cheesy tactics like having Brown look straight at the camera and talk or smile or wink to us. Breaking the fourth wall can be an effective device, but Taylor doesn’t make it organic to the film as a whole. Instead of feeling like Brown is letting us in on his most private moments, it’s clear that the director is simply using it in order to take advantage of the best thing he has at his disposal—his charismatic leading man.

A tighter movie would have focused on one major event in Brown’s career—his riot-stopping show in Boston after the assassination of MLK would have been a perfect choice—and used that as the climax of a solid three-act structure that would have allowed us to see all of his contradictions and heroic qualities. Instead, by attempting to show his entire life story, Get On Up runs out of steam after an hour or so, leaving us with a series of scenes familiar from every other musical biopic. Tearful reunion with the mom who abandoned him? Check. Struggle with drugs? Check. Reconciliation with the old partner? Check. Chadwick Boseman has done right by James Brown in Get On Up; it’s a shame the movie isn’t worthy of either of them.