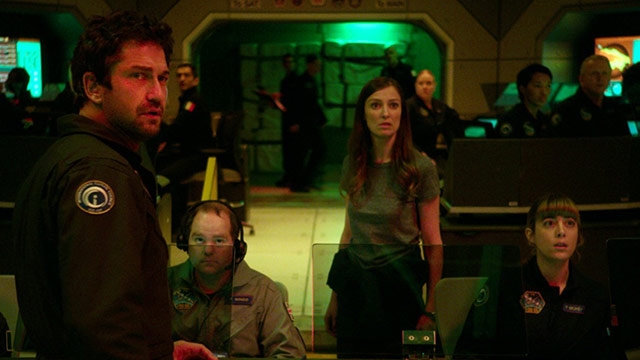 Dean Devlin, co-writer and producer of Independence Day, makes his feature directorial debut with the sci-fi disaster movie Geostorm. The story centers on Jake Lawson (Gerard Butler), a genius engineer who designed a satellite-based weather-control system that currently protects the planet from catastrophic natural disasters. After UN troops find an entire Afghan village frozen in ice, an investigation is launched and Jake is tasked with fixing the satellites. Along the way, he discovers that the system was hijacked and used as a weapon, forcing him to unravel the mystery of who’s deliberately wreaking havoc on Earth.

The cast do a mostly effective job of bringing their characters to life—although Jim Sturgess’ portrayal of a political chess master doesn’t quite hit the mark—with Talitha Bateman in particular giving a standout performance as Jake’s young daughter. However, the story itself is uninspired and could have been told in less time. In addition, the political intrigue that Devlin tries to weave through the plot is a thread that’s almost as frayed as the science behind the premise of the movie, and the personal relationships that drive the drama—though well-acted—aren’t deep enough to make viewers feel the stakes. Given the film’s numerous shortcomings, it’s a good thing that the visual effects are fun to watch.

Geostorm is at its best when it doesn’t overextend itself past its action scenes; it’s basically an updated, if less fantastic, version of Independence Day. If you didn’t get your big-budget blockbuster itch scratched this summer, you’ve still got a chance. But if you’re hoping for more than a popcorn flick, there are better choices at the multiplex right now.