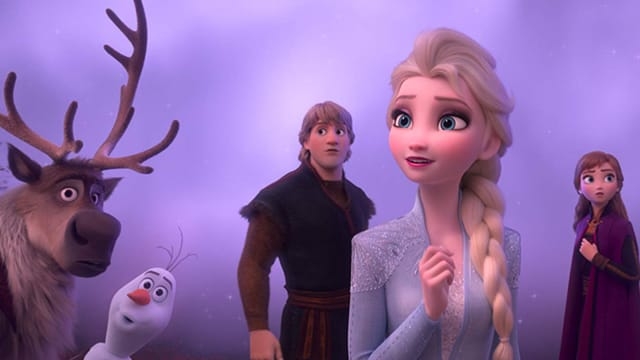 Frozen 2 digs deep under the ice to recapture the magic that made the original Frozen one of the biggest commercial successes in film history. Filled with rich music, gorgeous visuals, and reuniting the talented original cast, this hit is perfect for kids, and pleasant enough for the people accompanying them in the theater.

Queen Elsa (Idina Menzel), who has decidedly proven herself to be a happy introvert, is not content to rule her kingdom of Arendelle. Mysterious voices start speaking to her, saying something she doesn’t quite understand, although when her kingdom is attacked by magical forces, she realizes she needs to set out on an adventure to go find out more.

Her devoted sister Anna (Kristen Bell) insists on going with her to both protect her, as well as help save the kingdom. She is willing to risk her life to protect her Elsa, despite her sister almost killing her twice before.

Undeterred by that trauma, Anna’s protector Kristoff (Jonathan Groff) insists on going along as well, safeguarding them along with his humorous, hungry moose Sven.

Olaf (Josh Gad), the talking magical snowman, brings his dense, yet sweet humor to steal the scenes wherever possible. The emotional moments in the movie are well balanced with a lot of laughs—and silly ones at that. This simpleton brand of humor is organic, and not mean-spirited, nor does it have low-brow potty humor like many other kids movies.

The group discovers some heroes who live in a world not far-removed from their own, though filled with its own magical mysteries and some deadly elemental forces that could easily bring a scare to the younger ones. The best moments are watching Elsa truly unleash the limits of her ice magic, as well as Anna jump in to be the hero, even though she lacks magical powers.

While composers generally get only a nod, Kristen Anderson-Lopez and Robert Lopez—who created a cultural phenomenon with the original Frozen soundtrack—return here in prime form to try to crank out some original new hits including “Into the Unknown.” Composer Christophe Beck returns as well to add a broad range of emotional background music woven into the stunning, snowy visuals.

Jennifer Lee (Frozen, Wreck-It Ralph) returns to write the screenplay, which while not surprising, is unique enough to warrant a sequel. Flashbacks to Elsa and Anna’s parents prevent any obstacles for the film to produce a similar sadness that the origin story allowed, yet most of the ideas here are cleverly executed and fresh enough to make this its own unique movie. Frozen II is at its best when it does try to break out of the chains of being a sequel.

Lee and co-director Chris Buck (Surf’s Up, Frozen) expertly guide the original cast into some fine vocal performances. The songs are powerful despite those notes so high that kids mimicking them will not be able to hit, and the acting is solid throughout the film. The beats are uneven with longer-than-expected slow parts, though the payoff when the action comes makes it worth the wait.

Ultimately, Frozen 2 is a must-see for anyone with kids who saw and are still in love with the original, or who don’t want their kids to go to school and miss out on what every other kid is excited about. Adults may find a modicum of interest in it, though they may primarily enjoy witnessing their kids’ satisfaction.