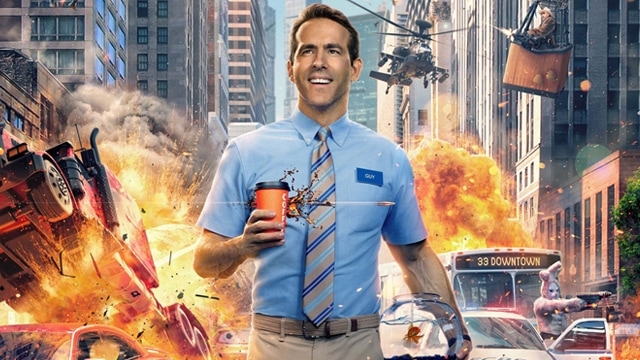 Director Shawn Levy (Stranger Things) takes on video games, artificial intelligence, and the meaning of life in Free Guy. The intelligent script from Matt Lieberman (Scoob!) and Zak Penn (The Avengers) is both hilarious and heartwarming,

Guy (Ryan Reynolds) is an ordinary average everyday man, getting up each morning, saying hello to his goldfish, getting dressed in the same clothes, going to the same job as a bank teller… and laying down on the ground six times a day for robberies. But one day, he decides he wants more. He wants love, and as fate would have it, he sees the perfect girl. The only problem is that Guy is a non-player character (NPC) in an open world MMORPG, a video game that thousands of people worldwide are playing at the same time. The one he falls for, MolotovGirl, is actually Millie (Jodie Comer), one of the real-life people playing the game. Even though he has become self-aware, both are unaware of his status as an NPC. Unfortunately, their romance is destined to end in tragedy because Antoine (Taika Waititi), the game company owner, intends to delete it in two days. They must work together to find a way to prevent the servers from being taken offline before Guy's world is erased forever.

Free Guy is one of those rare films that captures the audience in the first five minutes and holds them right up until the credits. The writing is excellent, and the authors are clearly very familiar with video games. There are so many references to popular titles that only the most avid player will be able to recognize them all in one viewing. Many of these references are clever, showing playfulness by the writers who knew that their audiences would get it. Levy does a great job guiding the actors and the action to keep the pace steady. Reynolds is fantastic as a non-person seeking to find his place and life in a world he only partially understands. Waititi is a bit exaggerated as the villain. Even this works in a film revolving around the world of video games both inside the game and inside the game studio. Adding to the fun is the usage of several well-known gaming streamers, commenting on the action and included in a very organic and believable way.

The special effects and CGI are video game realistic. A nice touch is the normal realism when viewing the world from within the video game and the not quite human look of characters when viewing it from outside the game. Excellent instructions and background material were given to the animators so that character and game references were spot-on to the original source material. Because of this, audiences are sure to enjoy watching the game unfold, and many are likely to want to play it, as well.

Free Guy is a fun, entertaining, and frequently comical film that simultaneously respects and ridicules the passion behind online gaming. It treads the line between these so carefully that almost anyone who has played a video game will enjoy the callbacks, and anyone who hasn't can still enjoy the film without it pushing any buttons.