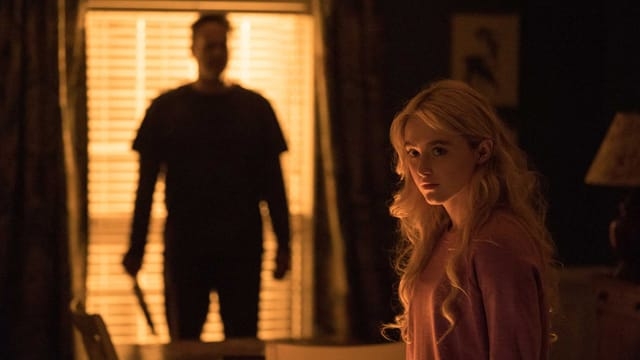 Freaky is a horror-comedy that’s somewhere between Freaky Friday and Friday the 13th. When a serial killer accidentally swaps bodies with a secretly hot dorky introvert by stabbing her with a magical dagger, they only have 24 hours to reverse the curse before it becomes permanent.

The Blissfield Butcher (Vince Vaughn) a living urban legend who is infamous for murdering innocent teens, brutally takes the lives of four more victims. A masked serial killer who delights in death, it seems that nobody is safe from his clutches.

Meanwhile, high school teenager Millie (Kathryn Newton) is already deep in her own problems. Invisible to men, bullied at school and overly responsible for her single mother at home, she relies on the support network of her two besties: smart girl friend Nyla (Celeste O’Connor) and gay boy friend Josh (Misha Osherovich) who both adore her.

When the Blissfield Butcher sets his sights on killing Millie, he manages to get her alone, stabbing her with a mythical knife, which ends up casting a magical spell on both of them. Their souls swap, which means they each wake up alive inside of each other’s bodies.

Now, Millie is stuck in the body of a serial killer, who the entire town is after. She must convince her friends that she is who she claims, and track down the real killer so she can undo the curse before it becomes permanent. Things are made even harder for her since she has no idea what to do inside of a man’s body when she’s around Booker (Uriah Shelton) whom she has an obsessive crush on.

Meanwhile, the Blissfield Butcher is all too happy to be trapped inside the body of a beautiful, innocent teen girl, donning a leather jacket, and a bad attitude to continue his murderous rampage in a much more inconspicuous way. Now, the only thing that can stop him is that same teen girl, except in his body.

Directed and co-written by Christopher Landon (Happy Death Day, Scouts Guide to the Zombie Apocalypse) there’s a professional touch in seamlessly blending genres once more. Sifting two tried and true strains of hits, there’s a delight in watching the physical comedy of a teenage girl ashamed of becoming a much older man, along with a guilty pleasure in watching the Blissfield Butcher as a teen who delights in killing and exacting revenge on the bullies who tormented her.

Freaky wavers between lovingly paying homage to the both the horror and comedy movies it replicates, and going overboard in becoming a bit schlocky in its own right. The high-concept identity-switch blended with a teen-slasher film is a clever idea, which works most of the time, only faltering when the overused tropes fall too closely in line with expectations, offering no surprises other than jump scares.

Freaky leans much more heavily on the dark, than comedy, but is a strong offering for both genres. Although the ultra-violence does tend to undercut the lightness of the film, there are enough breathers to let the one-liners shine through the darkness. Enjoying the cast masterfully at play is reason enough to validate a watch, but there’s also some good old-fashioned nostalgia at work here.