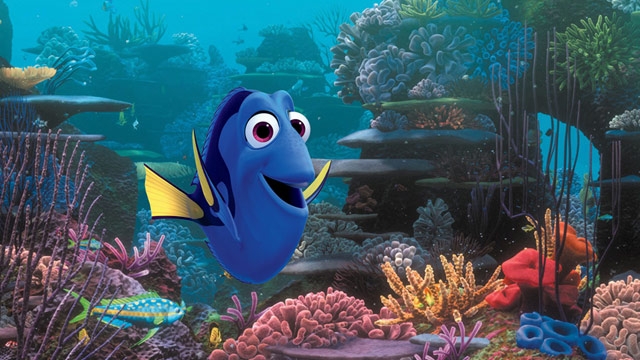 Finding Dory, the long-awaited follow-up to 2003’s beloved Finding Nemo, is finally here -- and it was worth the wait. Equal parts endearing, funny, and poignant, it’s a beautifully made story that defies the expectations of mediocrity often associated with Pixar’s sequels (Monsters University or Cars 2, anyone?).

The film picks up a year after the events of Finding Nemo, with Dory (voiced by Ellen DeGeneres) living next to the anemone dwelling of Marlin (Albert Brooks) and his son Nemo (Hayden Rolence). While the trio seem to be living a peaceful life together in the reef, it is clear that Dory’s continuing struggles with short-term memory loss have been frustrating for both herself and her friends.

The adventure kicks off when Dory begins to remember her parents and other snippets from her childhood, including a fragment she believes is connected to where she grew up: “the jewel of Morro Bay, California.” With the help of Marlin and Nemo, she decides to embark on a journey across the ocean to find her mom and dad.

The trio’s voyage commences with some quick and fun cameos from beloved surfer-dude sea turtle Crush and his adorable son Squirt (popular favorites from Finding Nemo), who use their knowledge of the currents and tides to bring Dory and friends to California. There, they arrive at a much less controversial version of Sea World, a marine-life institute that promises to rescue, rehabilitate, and release injured or sick sea creatures (the facility also introduces a hilarious cameo that becomes a running gag throughout the film, and which is just too magnificent to spoil here).

When Dory is separated from Marlin and Nemo inside the marine-life institute, she has to learn to rely on her new friends, and, more importantly, her historically unreliable memory, to find the place she recalls as her childhood home. Along the way, she meets a plethora of wonderful new characters, including (but not limited to) an ornery octopus who is determined to spend the rest of his life in captivity (Ed O’Neill) and a nearsighted whale shark named Destiny (Kaitlin Olson).

While the plot line of Finding Dory isn’t dazzlingly original, it is in no way a carbon copy of its predecessor. Instead, it draws on all of the elements that made Finding Nemo so lovable and successful, and uses them to continue the story of that movie’s cherished characters while introducing new ones that are just as compelling. The film spends less time in the ocean and more time in the marine-life institute, an environment that yields many opportunities for brand-new debacles and obstacles for the protagonists to face, in addition to new jokes and gags. There’s a nice balance of humor for both kids and adults in the audience, including some physical humor (like an octopus driving a baby stroller and later a truck), as well as a cheeky reference to a sex-education class during a moment in which Dory forgets what she’s talking about in front of the reef’s children. There is also a laugh-out-loud scene in the institute’s touch-pool exhibit, which is depicted as a nightmarish, monster-movie-esque setting for the poor sea life within. Plus, Idris Elba and Dominic West have remarkably funny cameos as a pair of sea lions who are very protective of their rock in the sun.

It’s notable that this film celebrates Dory, an endearing, determined, but imperfect protagonist who overcomes both the adversity she faces from others and her own self-doubt caused by her memory loss. The nonlinear plot structure contains multiple flashbacks to her childhood, which not only help guide Dory in her search for her parents, but add depth to the narrative and allow us to understand her perspective (also, baby Dory is unbelievably cute, as is the loving relationship she shares with her mother and father). The movie spotlights the way Dory’s friends and family support her, and it gives the story a heartwarming message. It’s often difficult to discuss living with a disability, especially in the context of a children’s film, but Dory’s self-confidence and positive attitude remind the audience that, if you just keep swimming and have faith in yourself, you can accomplish almost anything.