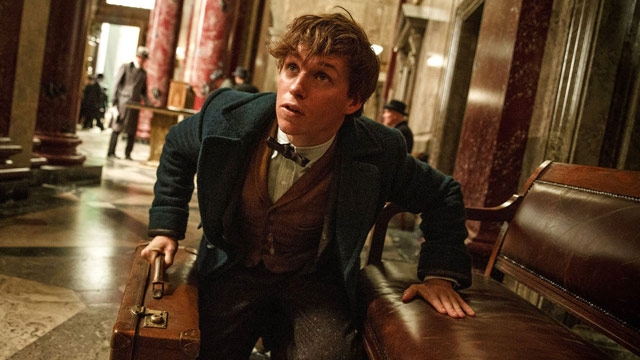 It’s been a whole five years since the Harry Potter saga came to a natural conclusion with 2011’s Harry Potter and the Deathly Hallows: Part 2, and Warner Bros. is desperate for more of that sweet, sweet coin it provided. Like every other studio in Hollywood, they’re in danger of losing the franchise arms race to Disney (who already control Pixar, Marvel, and Star Wars), and they’re hungry for more intellectual properties that they can squeeze for every last drop of blood. If that’s case, then at least expanding the world of Harry Potter makes sense (reminder: we are also getting a Transformers expanded universe soon), as J.K. Rowling’s fictional realm is richly detailed enough to merit further exploration. This spin-off is charming and does a decent job of finding the balance that all blockbusters today require -- giving the audience something that feels familiar, yet new enough to justify a trip to the theater -- but it’s undermined by the demands of launching a new megafranchise.

Fantastic Beasts and Where to Find Them jumps back in time to 1926, and across the pond from Hogwarts (which true Potter fans will know is located in Scotland, not England) to the wizarding community of New York City. It’s a shift that lets us see Rowling’s creation from a whole new perspective, as the film jettisons the boarding-school melodrama and coming-of-age narrative of the Harry Potter stories in favor of a tale about the fragile relationship between America’s magic users and its No-Majs, the ordinary humans who remain (so far) blissfully unaware of the former’s existence. A series of terrorist-like attacks by a dark wizard named Gellert Grindelwald (played by an A-list actor in a cameo that won’t be spoiled here) are threatening to upset the peace between the two societies, and so New York City is already on edge even before protagonist Newt Scamander (Eddie Redmayne) arrives there. Newt is in the Big Apple as part of a world tour to collect rare magical creatures, but he quickly makes things worse when his suitcase (which he uses to keep the beasts -- on the inside, it’s a gigantic habitat that can accommodate thousands of different organisms) is accidentally switched with a similar case belonging to a No-Maj everyman named Jacob Kowalski (Dan Fogler). The creatures get loose and scatter throughout the city, forcing Newt, Jacob, a disgraced wizard investigator named Tina Goldstein (Katherine Waterston), and Tina’s alluring, telepathic sister Queenie (Alison Sudol) to team up to find them before their presence pushes wizard/human tensions to the breaking point.

The frustrating thing about Fantastic Beasts is that it feels like two different movies fighting for screen time -- and one of them is a lot more interesting than the other. The first movie is a lighthearted adventure romp that never takes itself too seriously: Its “action” sequences feature Newt mimicking an elephant-like creature’s mating ritual in Central Park in order to lure it back into the suitcase, and it has enough breathing room for quiet scenes where the characters just talk to each other and moments of genuine wonder like Jacob getting a tour of Newt’s otherworldly menagerie. Then there’s the second movie, which is all about turning the gears of plot -- but just slooooooowly enough that it will take five (already announced!) films to reach this story’s grand finale. Colin Farrell has had a hell of a career renaissance lately, but he couldn’t look more bored here as Percival Graves, a glowering wizarding official who might as well be holding up a sign that says, “I’m up to no good!” He’s involved in a not particularly well-explained plot to unleash the powers of something called an Obscurus, which turns into a vague blob of grey and black that conveniently attempts to level New York City once the movie’s threat level needs to be cranked up to “world-ending chaos.”

Maybe one problem is that the Harry Potter universe -- as brilliantly realized as it is -- never found a good way to depict action scenes involving wizard combat. When two people face off in a Star Wars film, at least they have lightsaber duels to settle things; here, two magic users fire identical beams of energy at each other, then they both make very pained facial expressions as the beams clash and generate lots of noise while killing neither of them. It begs the question: Why did we need a huge, apocalyptic showdown like this at all? The quest to recapture the fantastic beasts is clever and occasionally tense -- why wasn’t that plot line enough without having to add a totally separate one? Watching a movie like this, you start to realize that, if E.T. The Extra-Terrestrial were made today, Elliott would have to get his alien pal to the spaceship in time or else California would be vaporized by a poorly explained superweapon. It feels a bit mean-spirited to beat up on Fantastic Beasts for being an example of a much larger trend crippling popcorn cinema, but that’s only because the film is winning enough at times to make those flaws stand out even more. There’s some real magic here, but it seems even magic is no match for the power of money.

Kubo and the Two Strings

Kubo and the Two Strings