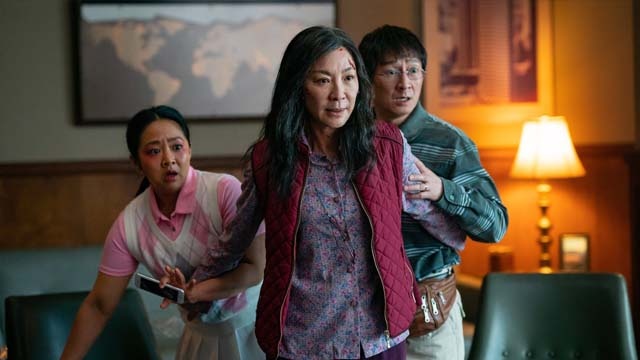 Everything Everywhere All at Once

High strung Evelyn (Yeoh) and eternally optimistic Waymond (Quan) are in a marriage stressed by their struggling laundromat as well as their opposing personalities. The film begins with two events: their audit appointment at the IRS office, as well as the upcoming Chinese New Year celebration. While Evelyn is at the audit, she is approached by Alphaverse Waymond with an ultimatum. Should she turn left to go back to her regular life where she has made all the wrong decisions? Or should she turn right to go on a fantastical adventure?

Everything Everywhere is a surrealist painting on the screen. Plot holes are non-existent, and physics don’t apply. At times goofy and other times deep and thought-provoking, this film pulls at the heartstrings. Not often is the silver screen graced with such a fable for adults. This movie plays with themes of relationships and fate. Not only will audiences leave their seats wanting to evaluate every decision they had ever made, but it will also lead to many phone calls being made to family members, especially mothers.

It is a rapidly unraveling jaunt full of heart and yet, at the same time, it feels relatable as it is anchored by incredible performances. Yeoh does an amazing job tackling the role of Evelyn, who is conflicted about the mundane life she has chosen as well as her complicated relationship with her daughter, Joy (Hsu). Audiences will be overjoyed and surprised at Jamie Lee Curtis, who kills it as Deidre, the evil bureaucrat. Quan is charming and naïve as all versions of loveable Waymond. Hsu is a revelation as Joy, the daughter who is always at odds with her mother and herself. Every character is delivered with 100% dedication.

Everything Everywhere is not for everyone, at least not for the faint of heart. Many open-minded viewers will enjoy this irreverent movie which unfolds like a butterfly emerging from its cocoon: bright colors, gorgeous design, fluttering wings, and infinite possibilities. For moviegoers who have seen “The Daniels’” movies in the past (e.g., Swiss Army Man), they won’t be surprised at this mind-bending journey and will delight in this “big box office arthouse” film.

The winner for the Adobe Editing Award at the SXSW Film Festival, Everything Everywhere is beautifully executed and is only missing one thing: a seizure warning. The film sits at 2 hours and 20 minutes and can feel a touch long, but it is quite a ride and is jam-packed full of everything… everywhere… all at once.