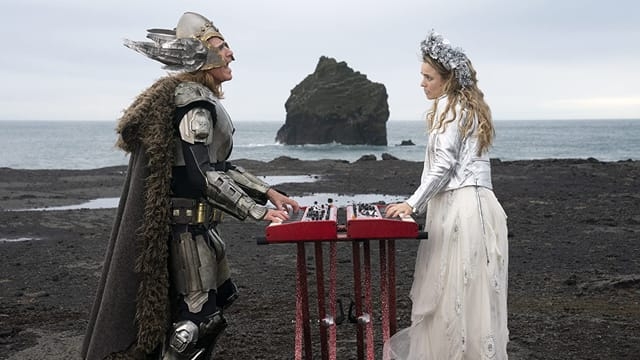 Nowadays it is hard to predict what we will get out of a Will Ferrell comedy, as the spectrum ranges from horribly unwatchable to spectacularly funny. Eurovision Song Contest: The Story of Fire Saga, falls somewhere in the middle, a film that truly does stay entertaining despite the poor acting and questionable pace. Director David Dobkin melds together the story of Fire Saga, an Icelandic duet with one goal: win the Eurovision Song Contest. What starts off as a ridiculous cookie-cutter Ferrell comedy, evolves into a fun underdog story that will have the audience cheering for Fire Saga before the credits roll.

Lars Erickssong (Ferrell) and Sigrit Ericksdottir (Rachel McAdams) grew up in the small Icelandic town of Husavik, with nothing to do except for mingle with the locals. After being inspired by the Eurovision Song Contest as children, the duo decided to commit their lives to becoming pop stars. Fire Saga was formed, and the two have dedicated every waking hour to their dream, much to the dismay of Erick (Pierce Brosnan), Lars’ disapproving father. A series of good fortune lands Fire Saga in the qualifying stages for the Eurovision Song Contest, and a disastrous performance almost ends their quest for superstardom. Luckily for the amateur pop duo, more good fortune arrives, and Fire Saga gets one more chance to achieve their goal.

Eurovision wrestles with itself for most of the movie, never knowing which direction to take. The script, written by Ferrell and Andrew Steele, is actually pretty engaging; there is nothing too deep or intriguing here, but the story evolves into an underdog tale filled with heart. At some point, the film stops trying to be a comedy, and starts to delve into Lars and Sigrit’s awkward relationship (are they siblings? lovers?). They are a very confusing pair, purposely crafted this way in the name of comedy. This leads to some pacing issues, as the plot starts to explore their mysterious relationship a bit too much.

As it becomes less of a comedy throughout the 123-minute run time, it becomes more of a musical drama. This development is for the best because the laughs are few and far between, and the comedic chemistry between Ferrell and McAdams just isn’t there. In fact, the acting is a low point here. Many scenes fall flat due to the co-stars’ inability to hold a consistent Icelandic accent, and most of the peripheral characters do the same. Dan Stevens portrayal of a fictional Russian pop sensation, Alexander Lemtov, suffers from much of the same. In a film centered around music, it should be noted that Will Ferrell sang all of his own vocals, while McAdams used the talents of Swedish singer Molly Sandén. Many of the musical scenes in the movie are enjoyable. Grandiose performances are littered throughout, and Dobkin’s brief experience of directing music videos really comes through in this flick.

Eurovision Song Contest is far from perfect, but there is enough here that makes it worth watching. Going into Eurovision with the right mindset is key. The novelty of the “little band that could” from a small town in Iceland makes the film a bit more grounded than one might expect, and thankfully, an engaging story allows the audience to filter out some of its glaring flaws.