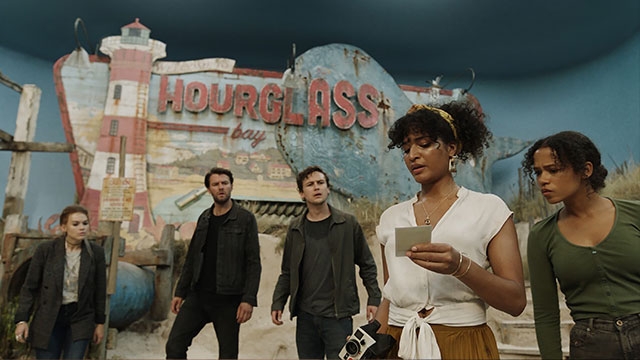 Escape rooms are a relatively new form of entertainment. Also called escape games or exit games, they came to popularity in the 2010s. It’s an amusement where visitors go to a physical location and, along with other players, are locked into a themed room in which they solve puzzles in order to escape. The rooms come in a wide range of themes but are usually mysterious in nature. Players solve cryptic riddles that lead them to new puzzles and clues—such as lock-combination numbers—until they finally find the key which unlocks the door that allows them to escape the room. Puzzle connoisseurs sometimes complain that the puzzles are often contrived in these escape room games. The characters in the first film were clearly just meant to create the winning combination of skills that would lead them to escape. The issue doesn’t improve in this sequel.

The film begins with a recap of its predecessor so that those new to the franchise aren’t left in the dark about its premise—a good touch that makes it more accessible, albeit one that feels as if it belongs more in a television series than a film franchise. After the recap, audiences are introduced—or reintroduced—to Zoey (Taylor Russell), who had escaped from the malicious games before. She’s talking to her therapist (Lucy Newman-Willams), and the therapist suggests that she fly out to New York to see Ben—a fellow survivor—in order to overcome her fear of flying.

With the seed planted and driven to bring down the maniacal organization that stages these grisly labyrinthine games with violent ends, Zoey drives to New York and recruits Ben (Logan Miller) to help her in her mission. Together, they seek out the business address of the Minos company, the criminal organization that started the entire twisted enterprise. They’re surprised to see that the building is abandoned. When a homeless man explains that it’s been condemned, he snatches Zoey’s precious pocket watch and runs off with it. Ben and Zoey try to chase him down and end up in the Canal Street subway station. It’s all a ruse though, and the two are drawn into a deadly game yet again.

The premise of being thrown into a deadly escape room is bound to tickle the fancies of those who enjoy certain things—mysterious puzzles and riddles, suspense, and the elaboration of human cruelty orchestrated by a shadowy organization. It’s been done before—perhaps differently or even better in some ways—in Vincenzo Natali’s 1997 film, Cube. Natali’s film allows its audience time to let the mystery set in, to let questions take root in their minds. Robitel, on the other hand, doesn’t allow for the same effect. Leaving no room for that, he instead propels viewers through a fast-paced journey from one set piece to another—a fancy bank, a beachside town—with some creative transitions between each one. Audiences are pushed along the Minos roller coaster of death games, so they won’t get much breathing room to wonder about the clues or time to marvel in the clever lateral thinking that the characters utilize to escape a grisly death.

The pleasure of the movie isn’t in its in-depth characters or their storied lives. It’s in the Rube Goldberg-like machinations of an evil genius—or in this case, a cabal of them. The movie is billed as a psychological horror movie, but it’s really more of an action flick. For this reason, those who enjoy savoring a movie’s intellectual offerings may get more out of a movie like Cube or James Wan’s Saw film franchise. On the other hand, escape room enthusiasts may enjoy seeing puzzles play out in a way that no real-life room would—especially the beachside room. And anyone who enjoys a faster-paced movie will be plenty entertained by this second entry in Robitel’s Escape Room franchise.