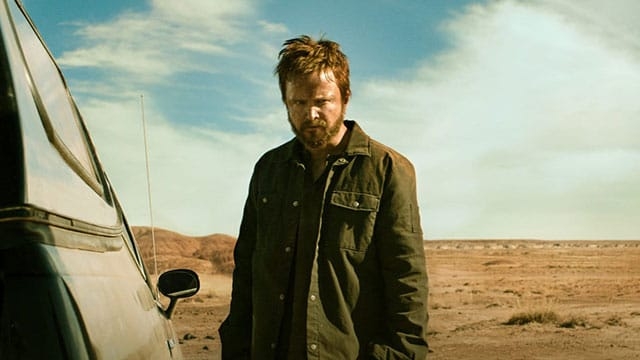 El Camino: A Breaking Bad Movie delivers a new, post-finale storyline for fans who can’t get enough Breaking Bad, or its spin-off prequel, Better Call Saul. For newcomers to the series, the film delivers enough backstory to stand on its own legs, even though it contains spoilers.

Fresh out of imprisonment from his neo-Nazi captors, Jesse Pinkman (Aaron Paul) finds himself running from the police. As he scrambles to figure out his next move, he’s faced with a laborious choice: does he try to get out of the game by coming up with enough money to pay back his debts, or does he just flee?

Driving a heisted El Camino, Jesse calls on some old acquaintances to settle his scores, for better or worse. He knows he has to get out of Albuquerque, and his biggest challenge is figuring out how to stay alive—and out of prison. With his face all over the news as the police build their case against him, there are plenty of other people after him, and they want him dead.

Something very humanizing about El Camino: A Breaking Bad Movie is Jesse’s desire to do the right thing, while doing the difficult things—including saying goodbye to friends and loved ones, or making deals even at his own expense so that he doesn’t have to dip further into doing the awful things he doesn’t want to do.

Flashbacks weave the story in and out of time: from his side mission with one of his captors, Todd (Jesse Plemons), who has his own mess that he needs help cleaning up, to past moments when he’s at odds with his mentors trying to give him good advice, and then again to his frantic, yet calculated escape tactics of the present.

Written and directed by series creator Vince Gilligan, the nuance and attention to detail remain a focal point. The most striking thing about the world he’s created is the intense realism in which his very flawed, authentic characters make their bad choices. Wherein most movies of this genre criminals are merely cold-hearted killers, here a broad array of people drawn into this underworld.

It is very rewarding to see that, despite his shortcomings as a person and his PTSD from his imprisonment, Jesse still has a few noble tendencies. While he’s in the thick of a bad situation, he manages to open up, showing what he has learned from his past.

A slowly building, character-driven thriller-drama, El Camino: A Breaking Bad Movie follows a desperate man trying to make the best choices he can in a world pitted against him. Fine performances coupled with a storyline that merges the realistic and fantastical deliver a satisfying end to what had already been an effectively concluded tale.