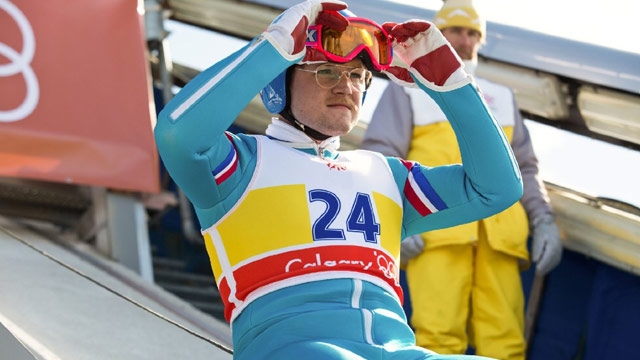 Critically acclaimed biopics usually delve deep into their subjects’ tribulations and personal flaws, stripping away the veneer of his or her legacy in order to paint a clearer picture of the human being behind the work. Dexter Fletcher’s Eddie the Eagle, for better or worse, is not that kind of movie. The titular character, Michael “Eddie” Edwards, found his fame as an Olympic ski jumper for Great Britain, and is portrayed here by Taron Egerton (Kingsman: The Secret Service). Edwards is first seen as a youngster with a leg brace, so desperate to one day enter the Olympics that he keeps trying to board a local bus in the hope that it will take him all the way to Rome (Tom Costello plays him at this age, and he brings to the role a wonderful comedic touch and heartwarming gumption). Much to the consternation of his practical, protective father Terry (Keith Allen), Eddie’s mother Janette (Jo Hartley) inspires her son to keep following his dreams, which eventually focus on downhill skiing. When England’s Winter Olympics committee, headed by the stodgy Dustin Target (Tim McInnerny), deny the 22-year-old Edwards a chance to even compete for a spot on the team, he decides to switch to ski jumping and quickly falls in love with it, despite his inexperience and extremely late start (a Norwegian coach informs him that most Olympians take up the sport by age six).

At this point, Eddie begins to wonder if his lifelong dream of competing in the Olympic Games will ever come to fruition. He is eventually aided in his goal by former U.S. ski jumper -- and current drunk -- Bronson Peary (a fictional character created for the movie, and played by Hugh Jackman). Giving easily the most enjoyable performance in the whole film, Jackman commits completely to the role, as Peary’s sardonic dryness, coupled with an irrepressible zest for the sport, nicely complement the picture’s agreeable yet schmaltzy tone.

The fact that the filmmakers felt the need to exaggerate Eddie’s story, which was already pretty outlandish and inspiring to begin with, is a little puzzling. Most of the script, written by Sean Macaulay and Simon Kelton, relies on solid bits of humor to break up Eddie’s disappointment and gradual victories. However, the story eventually goes into full-on “Hollywood production” mode, adding scenes like an unnecessarily tense confrontation between Eddie and Peary (which is never addressed again afterward), and a maudlin moment in which Peary finally gets some positive affirmation from his former coach Warren Sharp (Christopher Walken). Walken typically brings a subversive vibe to every movie he’s cast in, but he’s criminally underutilized here as a stock father-figure character. Likewise, Target is such a one-note villain that he ends up looking like the creation of an amateur improv class.

Eddie the Eagle mirrors the story of the man it profiles, as its faults are almost inseparable from its more endearing qualities. The bold, utterly ‘80s, and completely cheesy synth score from Matthew Margeson sounds like it was pulled from one of the decade’s instructional videos or generic Olympic recaps. Yet the style of the music is precisely why it fits Eddie’s tale: It’s deceptively strong and propulsive, with an unmistakable element of fun to it. Yes, there are scenes that drown in unearned sentimentality, but the highlight of the film is an action climax that turns out to be quite emotionally affecting, and serves as a worthy conclusion to the narrative (despite a pair of slushy scenes that follow). Overall, this movie will not win any awards, but it is nice to see a dreamer made good teaming up with Jackman as another grumpy, reluctant hero. Eddie the Eagle is worth a viewing for anyone looking for a pick-me-up or a (somewhat) true-life underdog story.