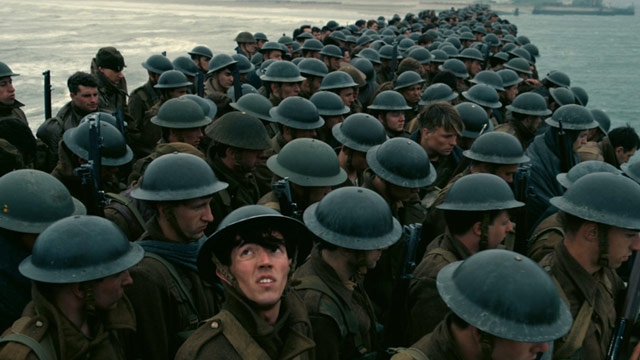 Dunkirk, Christopher Nolan’s gripping and engrossing World War II drama, is pure cinema. The rescue of 400,000 Allied soldiers, hemmed in by the Nazis on the beaches of Dunkirk in northern France in 1940, is told with minimal dialogue or commentary, and what dialogue there is is often unintelligible due to explosions, gunfire, thick accents, and Hans Zimmer’s relentless, nerve-shredding score. Instead of providing background or exposition, Nolan plunges viewers directly into the conflict as a group of soldiers run through the streets of Dunkirk, desperately trying to avoid German snipers. One soldier, Tommy (newcomer Fionn Whitehead, impressive), manages to scramble over a wooden gate and escape; his comrades aren’t as lucky. Tommy immediately heads to the shore and discovers he’s not alone. Hundreds of thousands of French and British troops are lined up waiting for naval ships, or any other vessel, to arrive and take them across the English Channel to safety. Unfortunately, they are sitting ducks in the meantime for the German Luftwaffe, who routinely strafe the coast with machine gunfire and bombs. They also sink any ships attempting rescue.

Most filmmakers would have Tommy engage in conversation with some fellow grunts to develop character. Not Nolan, who also wrote the lean, sharp script. Everything in Dunkirk is immediate and visceral; there’s no time for chitchat. As such, the pictures tell the story. And what pictures Nolan gives us, ably assisted by top-notch cinematographer Hoyte van Hoytema (whose work should be remembered come Oscar season). They tell their pulse-pounding tale in three distinct story lines—on land, sea, and in the air—with three varying time frames. The portion on land takes place over the course of one week. The sea segments, in which ordinary citizens use their fishing vessels, yachts, and sailboats for a rescue attempt, cover one day. And a riveting aerial battle encompasses only a single hour. But Nolan and editor Lee Smith expertly blend the three scenarios together into a mostly seamless collage, which makes it feel as if they are all occurring simultaneously. The gimmick mostly works, but it does get a bit confusing when day and night scenes bump up against each other. Also, the three strands don’t logically fit together when they merge at the end, although most viewers won’t care or even notice by then due to Nolan’s total mastery of his medium.

Dunkirk is, in many ways, the antithesis of Saving Private Ryan. There’s little blood; zero character development; and, aside from the aerial dogfights, no real battles. The focus instead is on immediate survival. We quiver along with a group of soldiers as they huddle together in the hull of an abandoned boat while enemy bullets continually rip through the metal. We’re trapped underwater with soldiers trying to escape a sinking Red Cross hospital ship hit by a torpedo. We ride along with an ordinary man (Mark Rylance, understated and excellent), his teen son (Tom Glynn-Carney), and the boy’s friend (Barry Keoghan) as they pluck a shell-shocked soldier (Cillian Murphy) from the sea and help other stranded men engulfed in an oil fire blazing on the water. And the exhilarating dogfights are given more urgency as a Royal Air Force pilot (the always superb Tom Hardy) must decide between returning to base due to low fuel or continuing to fight, thus possibly saving countless lives.

Dunkirk clocks in at a brisk 106 minutes. Nolan doesn’t attempt to capture the enormity of the Dunkirk crisis, but rather focuses our attention on a few isolated individuals and incidents to better reveal the personal horrors they faced. Each member of the ensemble cast is excellent: In addition to the aforementioned names, Harry Styles makes a distinguished debut as a distressed recruit, and Kenneth Branagh brings sturdy support as a naval commander overseeing the rescue operation.

When one baby-faced soldier returns home on a train, he’s greeted by a man who tells him, “Well done!” The kid says that all he did was survive. The man replies, “That’s enough.” In Dunkirk, victory is survival, which Nolan makes abundantly, thrillingly clear.