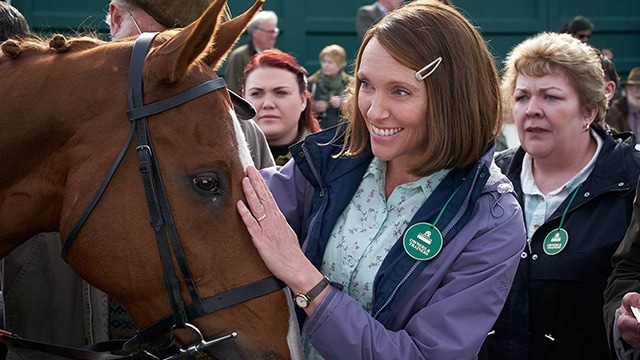 Dream Horse tells the true-life underdog story about a group of Welsh villagers who collectively bank a very small, weekly sum of money to try to raise a racehorse for profit. Helmed by an ambitious bartender, this unlikely team of humans and animal make a surprisingly splash in a difficult industry, despite their lack of experience or training, and regardless of any chance at winning.

Jan Vokes (Toni Collette) is a career bartender in a small mining village in South Wales. She works two jobs, while dreaming of something bigger for herself. Stuck in a rut of caring for her sick husband and parents, she has little joy in life save the animals with which she surrounds herself.

When she overhears out-of-town patron Howard Davies (Damian Lewis) bragging about his glory days as part of a syndicate that raced thoroughbreds, she gets a spark of an idea that she could blend her talents and do that for herself. She hatches a plan to rally the impoverished town to chip in a few dollars per week. This would allow her to purchase a mare so that she can breed her own baby racehorse and raise it up.

Despite the warnings of how difficult the task is and how slim the odds are that her horse will ever win a race, Jan oversees that their new team, Dream Alliance, has something to look forward to in life. With a little luck and a lot of grit and determination, the team manages to raise a possible race contender. Even though it’s incredibly unlikely, the team wants to see it through to the end.

Howard, however, is hiding the racehorse from his wife, who’s still concerned that he almost lost everything when he was involved with horses in the past. For better or for worse, the people of small town Cefn Fforest must go head to head racing horses against rich lords who are much better equipped to win. Will this bring Jan the joy in life that she’s been lacking?

Directed by Euros Lyn (Doctor Who, The Library Suicides), there’s a small-town charm at work as he pulls an outstanding performance from his cast, especially the leading lady. He may have drawn on his own Welsh roots to add authenticity to the project, as there are so many lovely details and strong evocation of life in the village.

Unfortunately, Dream Horse is more about Jan Vokes than the horse, with the most interesting scenes include the titular character and its bond with her. The horse disappears for major segments of the movie, so much in fact that it’s curious how Jan has much to do with its success; yet there’s still plenty of fluff to keep it entertaining. Organic laughs coupled with forced, though effective drama make for a very well paced combination.

Dream Horse is a feel-good movie – a safe bet for a few laughs, a possible tear here and there and the feeling that you too can accomplish anything no matter what mistakes you’ve made in life, as long as you’re determined. It may not be memorable, but in the moment it hits all the right notes with a resounding cheer for the animal and humans alike.