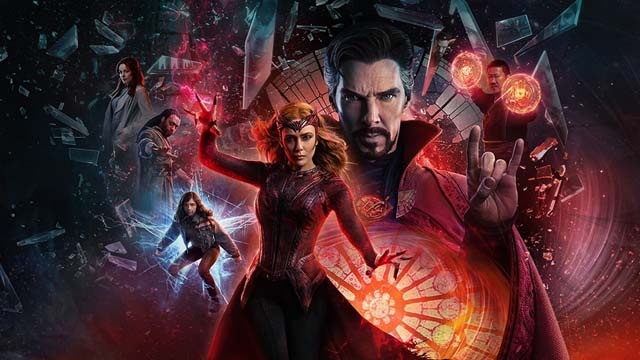 In Doctor Strange in the Multiverse of Madness, director Sam Raimi (Army of Darkness) takes a script by Michael Waldron (Loki) and creates an eye-popping masterpiece that combines horror and fantasy. Though the story suffers a bit from underdeveloped characters, the fantastic musical score and various visual components easily overcome its shortcoming.

Dr. Stephen Strange (Benedict Cumberbatch) has nightmares of a horrific version of himself. Despite this, he tries to go about his daily life and attend the wedding of Dr. Christine Palmer (Rachel McAdams). The nightmares come to partial reality after the ceremony when America Chavez (Xochitl Gomez), the girl from his visions, becomes a stark reality in his universe. Now, Strange must combine his talents with those of sorcerer supreme Wong (Benedict Wong), and also the witchcraft of Wanda Maximoff (Elizabeth Olsen), to prevent the destruction of the multiverse itself. But the first step is finding out who wants to steal America's hidden talent and why. The answer is as shocking as the intent.

Waldron has created a skillfully written, multi-layered story that is neither short on horror nor action. But he has done so at the expense of the individual characters. The focus, of course, is on Strange, and Cumberbatch continues to improve his game as the character. But despite introducing other heroes old and new, as well as the two female leads so prominently displayed on the poster, the characters are not fully developed; and so, the spotlight remains on Strange. It is also notable that anyone who hasn't seen the limited series WandaVision will be lost with the motivations of the Scarlet Witch. Nonetheless, this issue does not entirely take away from a thrilling storyline. Also, knowing Raimi's history as a director, chances are there wasn't any issue until the studio called for 35 minutes of cuts. Another reason, perhaps, is that the studio didn't want to take too much focus away from the lead character and shine it on those that will be more developed later.

The real co-stars of the show are the amazing visual effects and incredible score. In the past, there have been issues with CGI not looking organic. This is never the case here, whether there is a horror from another dimension on the screen or the characters are hurtling through space. Even by Marvel standards, this is a triumph. Every bit of music throughout, whether beautiful or discordant, fits perfectly with the action, especially one particular battle scene. The score demonstrates that Danny Elfman is still a master of writing for the strange and unusual, and, in fact, this is one of his best.

Doctor Strange in the Multiverse of Madness is a visual feast with a great menu but small portions in the character-development course. The story is multi-faceted and visually stimulating, and every other aspect of the film more than overshadows any issue.