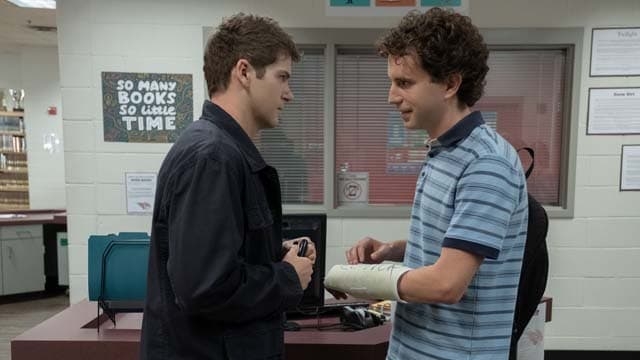 Dear Evan Hansen is a musical coming of age drama film about a troubled teen who gets himself into a heap of trouble. When mentally struggling teenager Evan Hansen accidentally prints a note he had intended to write to himself as a form of therapy, a fellow broken schoolmate ends up taking it. When that schoolmate ends up dead the next day, the letter is the only thing the family has to try to piece together his death. Evan then lies about a friendship with the boy to soothe the family and win their daughter’s heart.

Evan Hansen (Ben Platt) is a socially awkward teenager living with his divorced mother (Julianne Moore). He’s seeing a therapist who gives him homework, which is to write letters to himself to help him process his feelings. Even with medication, he can’t seem to make friends at school. His mother pleads with him to make friends as the new school year is starting, though Evan is hindered by a cast on his arm. He has a huge crush on schoolmate Zoe Murphy (Kaitlyn Dever).

In a strange twist of fate, Evan runs into her aggressive and mentally unstable older brother Connor (Colton Ryan) in the hallway. Fleeing from the scene, Evan holes up in the library where he edits his letter and talks about his feelings for Zoe, accidentally printing it out. When Connor finds Evan and tries to make it right by signing his cast, he sees the printed letter and steals it. A distraught Evan returns to school the next day to discover that Connor has killed himself, and the only thing they’ve found was the note that Evan wrote to himself, addressed “Dear Evan Hanson.”

Because Connor’s parents think that Connor wrote the note, and see Evan’s signed cast, they want to get to know him more, to help make sense of Connor’s death. Evan’s social anxiety is overcome by his feelings for Connor’s sister Zoe, so he ends up lying to the family that he was friends with Connor, in an attempt to make them all feel better. His lie is so good, that it instantly brings him love and acceptance at school, as well as closeness to Zoe. Headed by schoolmate Alana (Amandla Stenberg) “The Connor Project” ends up going viral and bringing in too much attention. The internet now spews hatred for Connor’s loving parents, though Evan is to blame. Will Evan be able to unravel his lie to save the Murphy family, and still get the love and attention he craves?

Based on the Tony award-winning musical stage play written by Justin Paul and Benj Pasek, Steven Levenson adapts it to the silver screen, broadening the settings to allow for a more personal look into the life of Evan Hansen. The ability for the film medium to get closer and follow Evan around works well for the deeply personal story that it tells. The strong writing creates real characters where there they could easily have been props along the journey, instead.

Well-crafted and technically sound, Dear Evan Hansen allows a fine vessel for some very committed performances. The musical numbers add a unique element which seems mostly unnecessary, save for a small part of the plot where it does play a significant role. That being said, there’s nothing bad about the film. It has a continuous drive to push the cringe-worthy main character deeper into a lie that attempts to bring happiness to everyone around him.