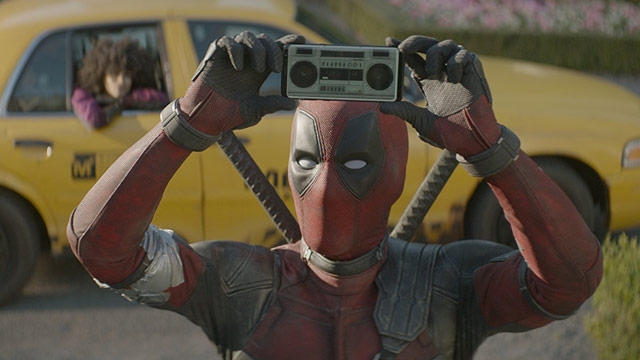 Stuntman-turned-director David Leitch (John Wick, Atomic Blonde) takes over the reins of the chronicles of the “Merc with a Mouth,” aptly portrayed by Ryan Reynolds. Returning scriptwriting team Rhett Reese and Paul Wernick (Zombieland) provide yet more proof that they can handle a serious story with a tongue-in-cheek attitude and pay excellent respect to Deadpool’s lack of respect for the fourth wall.

In this installment, Wade/Deadpool has a chance to turn his life into the closest thing to normal that he can achieve with Vanessa (Morena Baccarin, Gotham). Unfortunately, that does not work out the way he hoped, and the “Regenerating Degenerate” ends up on the road of self-recrimination. When given the chance at redemption by joining the X-Men at Colossus’ invitation, he blows it and ends up in prison. From there he takes a roller-coaster ride that leads him into encounters with Marvel classics such as Cable, Domino, and Juggernaut.

The film is two hours of non-stop action, special effects, and smart-mouthed remarks to a level that would only work in a script featuring Deadpool. While the action is over-the-top fun, it seems at times the scriptwriters were trying a bit too hard to push the envelope of both outlandish humor and the “R” rating. This is the only flaw in the writing, which is otherwise polished (Deadpool himself disagrees with this) and shows a studied knowledge of the characters.

Overall, the film is good enough to make these occasional moments completely forgivable. The fight scenes are particularly good, with action that is uncharacteristically easy to follow. For them, they take a page from the success of Guardians of the Galaxy for appropriately selected period music.

The real stars of the film are, thankfully, the stars of the film. In Deadpool, Ryan Reynolds has finally found his perfect superhero home, and even pokes fun at his other, less-than-memorable turn in spandex. Josh Brolin (Avengers: Infinity War) captures the steely, overly serious Cable with an intensity that never slips off into the laughable, which would have been easy to do. Atlanta’s Zazie Beetz is a perfect fit for Domino. Her brash, confident, and self-assured manner is a natural for a character associated with Deadpool, and the portrayal leaves the viewer wanting to see more of her. A few surprise actors round out the very brief first incarnation of X-Force, and the lead characters, both individually and mutually, do an excellent job of setting up the forthcoming X-Force movie.

Anyone that enjoyed the first Deadpool is sure to enjoy the second, and anyone that knows Marvel Comics (or Ryan Reynolds’ history) is sure to get a kick out of most of the related in-jokes. All-in-all Deadpool 2 was a thoroughly enjoyable action-adventure that will please the fans and leave them ready for more in the announced X-Force and rumored Deadpool 3 films.