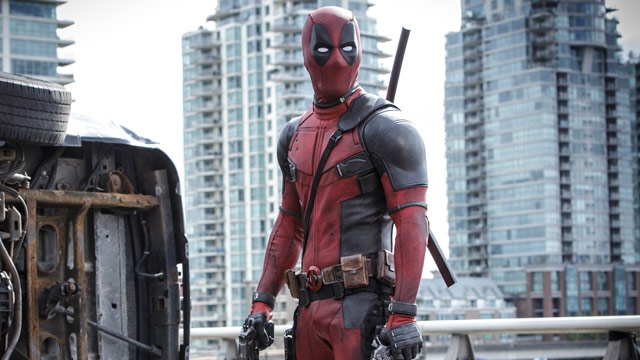 What’s that sound? That repeated thumping noise accompanied by muffled shrieking? Could it be Dr. Fredric Wertham, author of the notorious anti-comics screed Seduction of the Innocent and philosophical father of the industry’s self-censoring Comics Code, turning over and over in his grave as lustily as a pair of sneakers tumbling in a dryer? It must be because Deadpool, the psychotic, anarchic, pansexual, and compulsively wisecracking mercenary, has escaped the comics and is now running amok in his own movie.

The plot -- don’t worry if you don’t pay attention to this paragraph, Deadpool will make sure to fill you in via a series of explanatory flashbacks woven around the scenes of bloody mayhem -- is a basic origin story. Deadpool (Ryan Reynolds, cheerfully walking on the superhero wild side after failing to make a splash in the box-office dud Green Lantern) was once regular mercenary Wade Wilson, until a cancer diagnosis forced him to make a devil’s bargain with a mysterious company promising a cure. That’s when “are-you-sure-you’re-a-doctor?” Ajax (Ed Skrein) pumps him full of chemicals and subjects him to torture, reasoning that extreme stress will trigger Wilson’s latent superpowers. It does, but at a terrible cost: His skin erupts in a melted pizza complexion that would make the average person look hideous and makes Ryan Reynolds go from two beers to five. He wants his old face restored, but now that he’s clawed his way back from the brink of death, he sees everything as a cosmic joke, a Zen koan with a sick punch line. What is the sound of one hand clapping? Depends on what Deadpool is smacking it against after severing it from its owner.

China gave a resounding “no thank you” to the R-rated cut of this movie, thus lumping Deadpool in with Facebook, jasmine flowers, younger siblings, and golf as things banned in the country. The violence is significant -- it’s telling when a super-antihero chooses a red uniform to spare himself the hassle of laundering out bloodstains -- but what may have really made the censors go weak in the knees is the character’s frank and not-really-hetero sexuality (this film is a first in its depiction of a superhero voluntarily engaging in a sex act usually only mentioned in Dan Savage’s columns). But Marvel’s decision to release it as-is represents a not-insignificant gesture of faith in the movie’s quality, given Hollywood’s increasing dependence on foreign viewers for boosting the global box office. (Guardians of the Galaxy was rumored to have been translated as “Interplanetary Unusual Attacking Team” for Chinese-speaking audiences. I’m sure a similarly frank and literal translation of Deadpool would have turned the hair white on the giant poster of Mao in Tiananmen Square.)

Marvel’s faith was not unwarranted. This is a fun movie, a very adult delight for those of us able to appreciate entertainment that bridges the divide between fantasy and reality like the fourth-wall-busting Deadpool; it’s a too-cool thrill ride filled with all of the saturated fats of shameless ’80s trash -- gratuitous nudity, giddy carnage, jokes in so-bad-it’s-good taste -- and it’s as satisfying as a bacon double cheeseburger with a side of crack. The action sequences have the fierce, chaotic energy of a mosh pit, Reynolds brings warmth to a character whose grinning sociopathy is on par with the Joker (but whose heart is in the right place), and the screenplay by Zombieland writers Rhett Reese and Paul Wernick has a filthy (and self-aware) wit that brings loud guffaws to the opening credits and never loses steam. Deadpool is the rare comic-book movie that isn’t suffocating under the weight of its own self-importance, and that alone is reason to recommend it. Oh, and stay after the credits -- Deadpool would want it that way.